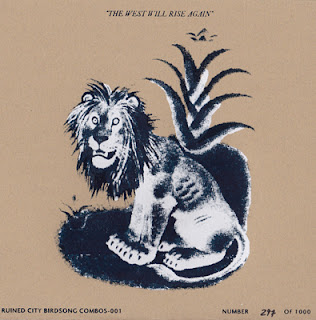 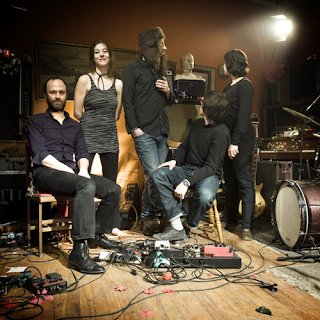 For as big as instrumental rock has gotten in the last couple of years, to me anyway it seems like interest has increased quite a bit within the last decade and styles like post-rock have really exploded and gotten huge. Though A Silver Mt. Zion is not an instrumental group, I still think that the principle applies to post-rock music, or whatever genre you'd put them into, this band seems bigger than ever. I'm sure at this point, if you know this band I really don't have to go any further into depth about what they're about or their past, so we can just focus on this new EP.
This release, for me anyway, picks up kind of where 2010's Kollaps Tradixionales left off with its more noisy take on post-rock but also continues with the bigger influence from folk music as well. Essentially what you have here is four songs, short songs may I add since not one songs tops seven minutes, that really appear to focus less on lengthy and drawn-out crescendos and climaxes and more on shorter build-ups and actual songs. I found that these songs really didn't have the same grandiose sense to them that some of the band's previous material had, and in exchange actually wound up sounding a little pompous, in my opinion. What We Loved Was Not Enough II felt is the track that I actually felt like the band were just being over emotional and maybe a bit too over the top for my own taste, but having said that I actually still found it to be my favorite track from this release. In addition to that, despite the more noisy approach to the guitars that are taken with this release, I do still think the group retain their sense for beauty, the closing moments of The State Itself Did Not Agree is especially striking in comparison to the other tracks on the release.
It's a well executed piece of work that should definitely build anticipation for their forthcoming full-length. Though I personally favor the group's less distorted and noisy sections, I did feel like this was a decent release that was a lot easier to digest than their last album. I don't think it's the band's best work and I doubt it will be held up to as high a standard as some of their early work, but if you're a fan it's definitely worth looking into.
Overall Score: 7
Highlights: What We Loved Was Not Enough II, The State Itself Did Not Agree
Posted by maskofgojira at 12:54 AM