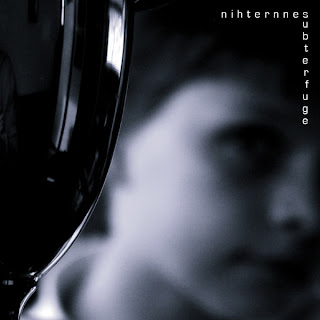 I have wanted to cover this album for some time now and now I can finally do it. As far as I know, this one-man band (I think it used to be a duo) is still pretty obscure within the metal world and I always love covering stuff that doesn't get as much press as it really should. This was one of those albums that just makes me want to review music, underground bands/artists that are doing interesting things and don't get as much coverage as they deserve.
What struck me right away when listening to this album was how progressive it was; I don't remember the project ever being as proggy as this on their previous releases. The opening three-part title-track moves from downright gothic metal (think closer to Type O Negative gothic, not female fronted gothic)to atmospheric black metal to very jazzy prog sections, and it all feels very natural. In addition to that, the use of multiple solos, from both guitar and what could be synthe, play a crucial role in the prog nature of the album. The majority of the album is actually pretty devoid of black metal and instead appears to focus more or less on being a proggy and atmospheric goth/doom record. Most of the vocals are done cleanly, with screams appearing sparsely throughout the album. From the few things I've read about this album, it actually appears that while most have accepted the overall tone and sound of the album, the harsher vocals appear to be sort of a turnoff, of which I can say that they do sound like they do have a little bit of distortion on them to make them sound a bit more harsh. The clean vocals I'm sure will be subject to debate as well, because they certainly aren't the best you'll ever hear and some parts are definitely stretched beyond what he is capable of, though for the most part the clean vocals are well done and fit the mood of the record.
I think it need to be applauded that on this release, we see main man, Daniel D. Astley, really putting together lengthy tracks that are engaging and manage to justify their lengths. Half of the tracks on this album top ten minutes and in my opinion, if you're gonna have a track that tops ten minutes, you better know how to make it sound good and interesting. On his last EP, 2009's The Mouthless Dead, two of the three tracks on there topped ten minutes, with one track that just barely topped twenty, and those songs, in all honesty, did have a tendency to drag at points, and that's not the case with this album, at least in my opinion anyway. The entire record is a journey, not just musically, but emotionally as well. While most of it is quite dark and somber, the instrumental In The Degree Absolute actually manages to perk up the album and sound almost uplifting.
On the negative side, I have to say that the production is a bit weak and the drums sound obviously programmed. The whole thing does sound a bit too digital at certain points which I found a bit disheartening due to the quality of the actual music was very high but certain elements just pulled it down. The entire album is also covered in this dark and cold atmosphere, to an extent it could be called gothic but I think that might be stretching that label a bit, that gives it a very melancholic and morose kind of vibe. I bring this up here because one could that the production is so cold and mechanical at times that it contributes to the dark ambiance of the record and helps it in sounding so dark. The drums, as I said, sound obviously programmed, and what I mean when I say that is that the drums sound way too robotic and mechanical when used in conjunction with the more fluid guitar lines that surround it. I should also say that the album is a little too long and I do think that the last track, Evasion, could have been scrapped or saved for a different release, not because it's bad, on the contrary, but it does feel like the black sheep on here, feeling more or less like a modern prog-metal band in the vein of Dream Theater than what earlier tracks had showcased.
After listening to it a couple of times, I'm not sure if this met my expectations or not, although I certainly did enjoy it from start to finish. It certainly has its flaws, but the good does outweigh the bad on this album and I did find it a step up from the project's early work. I do realize that this is an album that a lot of people probably won't like, for one reason or another, but I enjoyed it and I do recommend it if you like dark proggy metal projects. Hopefully at least a few people go out of their way to check this one out.
Overall Score: 8
Highlights: Subterfuge III - Dance of Illusions, Silhouettes, In The Degree Absolute
Posted by maskofgojira at 10:37 AM