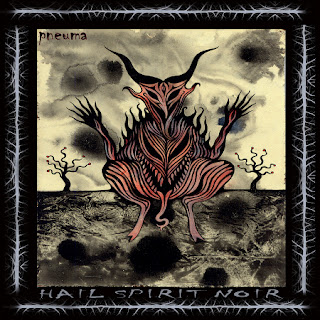 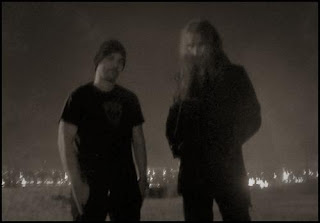 I don't think it's any secret that my tastes tend to lie in weirder bands. Personally, and putting genre tags on them is gonna sound really lame but, I find that albums that are termed as progressive, psychedelic, experimental, or avant-garde oriented black metal are albums that I'm most likely going to enjoy. Finding out about this project only a couple of weeks ago and finding out that one member is Theoharis of the mighty Transcending Bizarre? just made my ears perk up. I knew without even hearing a single song that this would be up my alley.
The word progressive and psychedelic can mean a hundred different things when you put it onto a black metal band, which can be a good and a bad thing; but unfortunately, it leads to a lot of very uninspired bands playing nonsense and thinking they're playing a cool and unique brand of extreme metal. That's not the case with this album. This album is progressive, this album is psychedelic, this album is unique, and this album is inspired. When I hear any of those terms, I expect some form of interesting songwriting and instrumentation, I'm not saying there needs to be a random accordion solo or anything, but I'd like to hear a band use an odd riff or create a section in a song that is just totally off-the-wall, and I got all of that from this album. In addition to that, this is an album that just sounds fun, especially in the bass lines, and there are some spots on here where you could dance to them if you wanted to, though those parts don't ever last all that long. There were spot on here that just sounded so great that it put a big smile across my face, and that doesn't happen unless I'm really getting into what I'm hearing.
I mean, there's definitely a black metal core to this, but it's being filtered through 70's progressive rock and jazz-fusion. I'd even say there's a good helping of post-punk thrown into the mix on here as well in some spots, Against The Curse, We Dream for instance. Obviously Theoharris' work with Transcending Bizarre? has helped him in creating the orchestrations on this album because the more symphonic aspects of these songs, when they're used I mean, they are interesting and creative, but they do differ from what you'll hear from TB?. The orchestrations aren't as overpowering, in a sense, as the work in TB? and work more to accentuate certain parts of the song rather than give it a more overblown and theatrical vibe. Even the vocals on here sound pretty unique to me, in the context of the album I mean. While the black metal oriented snarls are about what you'd expect to hear, the clean vocals really struck me because they had more vibrato on them than a lot of other vocalists I've heard, there were times when I was actually reminded of Hansi Kürsch (of Blind Guardian), which I find especially unique. I realize that I have overused the words unique and original in this review but I really can't find enough good things to say about this album because I've never heard anything that sounds like it before in my life.
I'm sure there are people who would say that the putting black metal through a filter of more experimental based music like the ones I just mentioned would diminish the overall quality and intensity of the record, and while I wouldn't say this is an intense record by any means, it is something I've never heard before. I mean, this isn't a heavy or super aggressive album by any means, but I don't think this record is meant to be. For as weird and progressive as it is, there really isn't any need to be brutal. I also am aware that the fusion of 60s and 70s prog, and even post-punk, into black metal isn't a new idea, but if you can tell me another band that sounds like this one does, you're probably going to be stretching the comparison because I've never heard another band sound like this one before.
While avant-garde, progressive, experimental, psychedelic metal bands are pretty standard in this day and age (yes, I do happen to enjoy most of them) I think it's hard to come by a genuinely original sounding album like this one. Sorry if you're a purist and you hate adventure, but I happen to love stuff like this. Creativity excites me and I rarely get to hear such an original album as this one. I think that it's pretty obvious at this point that I really enjoyed this album and that I'm a fan of this band, so it should come as any surprise that I do highly recommend this to fans of experimental metal.
Overall Score: 9.5
Highlights: Every Track Is A Highlight
Posted by maskofgojira at 11:38 PM