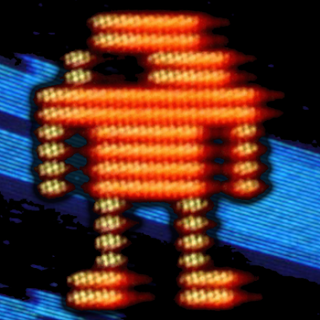 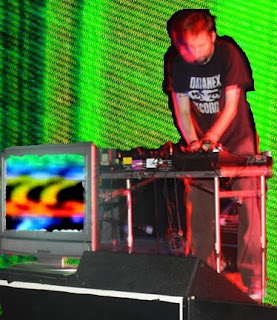 One of the first reviews I posted last year was for a chiptune project, which I wound up enjoying, though I never covered the genre again, nevertheless, when I got this I was excited. Despite that excitement towards the genre, I was a bit unsure of how this record was going to sound like because the releases that I've heard from Mind Flare Media have been based, more of less, among the noise end the spectrum. Along with that, I just found the cover art to be just terrible, not that that had any impact on the music inside, but just making a statement. Read on if you wish to know how this turned out.
It's odd that my fear about what this would end up sounding like was actually pretty accurate to what is actually on here. Mind Flare Media certainly found an interesting artist here because the sound that's used throughout this album is a mix between chiptune and noise music. If you think it sounds weird when it's written out, just wait till you actually hear it. You might think the fusion would be really out there and disorienting, but it's surprisingly immediate and quite accessible despite being quite noisy. The sound, if you stripped away all the noise, would give a pretty regular chiptune record, maybe one that's a bit more glitchy at times, but a pretty standard record; but with the noise it just has this more unstable kind of vibe to it. It honestly feels like at any point during a song, it could just fall off the deep-end and just go into full-on harsh noise. In fact, quite a few songs on here feature a noise backdrop to them despite essentially being more upbeat, and probably danceable in most cases if they weren't so harsh, hear Red Dragon vs Square Dude for example.
It's quite an appealing record if you're into noise or chiptune music, to an extent I'd even say electronica fans could find something appealing about this as well. Having said that, there are certainly elements of the sound that can be a little off-putting and are more than a little out of place. No matter how much I may find this album interesting and unique, there are moments that are a bit dull and don't really reach the same heights that other tracks do. I honestly found The Zaxxonian Theory to be an interesting track with some interesting ideas, but it certainly stands apart from any other song on the album due to it being a lot more based in ambiance and less on typical beats. Don't get me wrong, I'm not pointing that track out because I think it's bad because it's different, on the contrary, I point it out because I actually would have liked to have heard the project go down this road more often and explore more ambient noise-esque sound walls more often on here.
Overall, it can be a bit rough going at times and a bit disorienting at some points, but as a whole album, I think it's quite entertaining and interesting. The ideas, or rather the fusion of ideas, is one that I found to be genuinely attention grabbing and well worth checking out. Though this project has been running for quite a few years now, I'd actually like to hear it go into an even more experimental realm of sonic discovery (I'm sorry if that seems overly pretentious) and just become even more off the wall or make songs even more catchy and danceable. There's a lot that could be done with this sound and I look forward to hearing where this project goes.
Overall Score: 8
Highlights: Navigating The Hexagon, A Vision of Pyramids, Into The Darkness We Goeth
Posted by maskofgojira at 8:48 PM