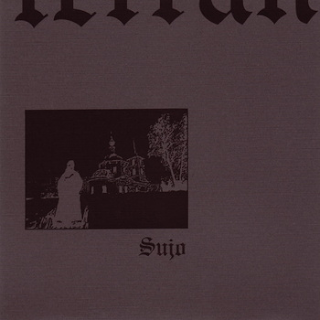 Since discovering drone music that is outside of the realm of funeral doom or Sunn 0))) rip-off territory, I feel like my overall appreciation for music, in general, has really expanded. When I used to hear the word drone, I had a very particular sound in my head that I thought would apply to pretty much every band and I was very cautious when listening to that stuff, though I think I was huge into funeral doom at that point so I don't know why I was so put off by the idea of it. While I would not say that drone is one of my favorite genres, I definitely feel like some of the most interesting bands I've discovered recently have come from a more drone oriented sound, or at least takes influence in some way from it.
Sujo is apparently an artist whose been producing music for a couple of years now and has built up a decent underground fanbase who are really into very limited pressings of his work. This five song EP grabbed me upon the first listen, which, coming from a drone artist who I had never heard of before being offered a chance to hear this album, was really surprising. Until about two and a half minutes into the opening title-track, Terran, I felt it was decent noisy drone, but then a surge of atmosphere just blows the track up to an entirely different level. Once that guitar hits, the entire release just seemed a whole lot better, and this was after getting through just that one track on the first listen. While the other four tracks have similar themes to that opener, the ideas are not nearly as well managed as that track until closer Divination. I know that sounds like a negative remark about this release but I don't mean it to because the three middle tracks are fine but don't combine the two elements, or the two basic elements rather, of the project's sound, noisy drones and post-rock guitar ambiances.
On a whole, I thought this was a very well constructed and performed piece of drone music, which could easily have branched off into a number of stupid sub-genre names which I won't go into. The entire thing flows together as a single piece, which is fine, and really is the only fault I can level at the release because it works as a whole and some tracks aren't as strong on their own as when played in conjunction with the others. I really recommend this if you're into drone, noise, post-rock, other sub-genres of those. It's a really solid release and I hope that those who check it out will find it just as interesting and well done as I did.
Overall Score: 7.5
Highlights: Terran, Divination
Posted by maskofgojira at 12:34 AM