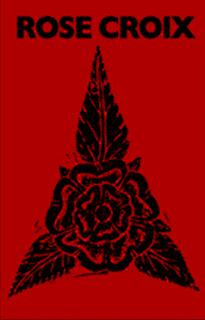 I guess it's worth saying that if anything that looks interesting to me is compared to a band I hold in high regard, regardless of genre, I will automatically listen to that group, and fortunately, or unfortunately, I usually have pretty high expectations for that group then. This trio has been compared to well respected groups like Laibach, The Moon Lay Hidden Beneath A Cloud, and for me the biggest and most important name, in my book, Dead Can Dance, so like I just said, high expectations. I knew it was going to be hard to try and get anywhere near what I consider to be an essential and legendary band, but I knew that being compared to them would at least give me a good album.
I should say that, like many other genres, I know relatively nothing about martial industrial music. I'm certainly aware and have listened to a handful of groups that have been described as such, but the experiences I've had with them have been divided; I've either found them interesting because they wind up mixing it with stuff like neo-folk of psyche-rock or I've found them really pretentious and rather dull, when they try to take the high road and go for the more orchestral-based synthe sound. While I have my own preferences, obviously, I can see the appeal that the more orchestral side might give to a listener I was happy to report that upon a first listen of this tape that it was not in that vein. I don't want to say that the entire record is devoid of those orchestral synthe moments, but those are used very sparingly throughout and aren't all that prominent.
I have to say, when I was listening to this record before writing this review, I really didn't pay much attention to comparisons and similarities Rose Croix had to other artists and groups, but once I sat down and kind of started analyzing it, I was really shocked by how much I could hear the Dead Can Dance influence. Like I said above, that was the comparison I was the most concerned about because they are an absolute classic band in my book and most comparisons to them are usually pretty unwarranted, but this one was surprisingly spot on. The vocals on here actually manage to pull off what I had thought would be the hardest thing to do, they manage to pull off a similar sense of meditation and coldness that Lisa Gerrard managed to do throughout her career with Dead Can Dance. While the sound on here really never treads into world music oriented meditations, the music does manage to retain a ritualistic quality to it. The entirety of the release manages to have that mysterious and slightly otherworldly air to it that makes it feel more like a ritual than just another martial industrial record. If I had to point out a glaring flaw on here though it would be the choice of synthe sounds during the latter stages of IV where the whole thing sort of moves into an almost danceable kind of section which I thought was a bit out of place, but still well done.
I really enjoyed this tape, it had a nice kind of atmosphere to it while still being very in the moment, or it made you want to listen to it, it wasn't background music, as some of these records can tend to become. I definitely recommend this to people who like more of an ethereal kind of quality within their music while not letting it fall into ambient territory. I guess what I'm trying to get across is that while it is music that is quite ritualistic and meditative, it is not without substance and is an engaging listen.
Overall Score: 8
Highlights: III, IV
Posted by maskofgojira at 7:46 PM