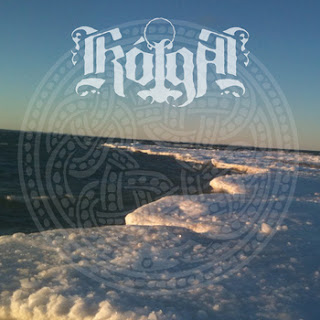 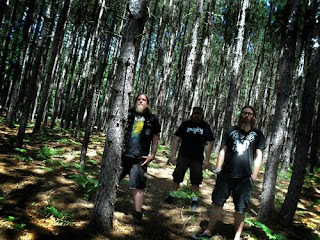 Ah yes, finally I can talk about the demo release from the newest-ish project from Austin Lunn of Panopticon, Kólga. This demo was first announced around the middle of last year (I believe) and has been delayed and delayed much to my dismay and was finally released last month. This three song debut from Austin, along with Jack Hannert of Seidr and Marty Rytkonen of Charnel Valley, proves to be everything I expected it to be and more, which should give you an indication of how I feel about it right away.
If you're familiar with Austin's work with Panopticon within the last couple of years, the sounds you'll encounter on this demo shouldn't surprise you. What the three songs on here bring to the table are essentially an extension of what he did on his second split with Wheels Within Wheels or the on 2010's compilation On The Subject of Mortality, it's the post-rock and shoegaze influenced black metal that isn't so much blackgaze as much as something between the modern post-rock influenced/post-black metal groups and more classic atmospheric black metal groups. As much as I love his stuff, this isn't just Austin's project, and Harnnert and Rytkonen do help to bring a different flare to the record that does separate it from Panopticon. The sound on here is closer to more modern post-black metal than what I mentioned above for Panopticon, but it's more raw and cold sounding. Due to how raw the recording is, and it's been a product that has, in my opinion, hindered Lunn's work in the past, the drums stand out and are quite loud in the mix and can overpower some of the quieter moments on the record. Having said that, to say that the drums ruin the record would be false and beauty can always be found within each track, no matter how loud the drums are, it always shines through.
Nothing super original here but performed and written in as expected high quality. It's a solid debut that definitely has the potential to grow into something far stronger and more interesting if the trio decide to keep the project going. If you happen to be a fan of post-black metal or black metal that is focused more on atmosphere, do yourself a favor and look into this quickly.
Overall Score: 6
Highlights: Out of The Wood
Posted by maskofgojira at 1:35 PM