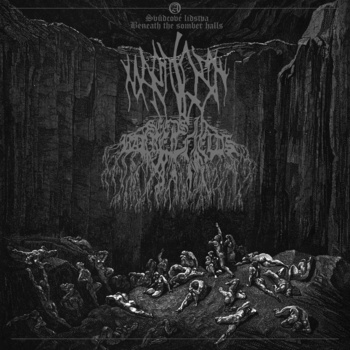 Back when I was first exploring the underground metal world and I saw the word "split" next to a title I was immediately turned off. For some reason the idea of two bands releasing an album together just didn't appeal to me back then, when my mindset was more along the lines of "If a band can release some new material with another band, why not just wait and release a new full-length later?" Obviously, my mindset has changed within the last few years, probably around the time I started this blog actually, and now I actually look forward to them. This split sees the collaboration, more or less, of two pretty underground groups who both prefer the DIY approach toward black metal.
Of the two bands on here, Seeds In Barren Fields was the one that I was actually familiar with and was the band that made me aware of the split to begin with. Their debut full-length, last year's Sounding The Siren Song In Vain was a great piece of blackened crust that really knew how to combine the two styles well and make full use of both sides of their sound. This new track, Beneath The Somber Halls, is an epic piece that, to my ears, has far more of a black metal vibe to it than a lot of their album did. Saying that however is kind of doing a disservice to the track itself, because any song that lasts for sixteen minutes, as this one does, has to have more going on than just brutal black metal assaults. Make no mistake, it is a black metal track, but the way these guys put it together makes it just fly by, with sections that are pure black metal that flow into more melodic and mid-paced parts. It still baffles me to no end how some bands feel that blasting for a number of minutes straight is interesting, let alone an entire album. I definitely applaud these guys because they know how to make a black metal song dynamic. Marnost is a far more isolated venture, with almost nothing really being known about the group. They released a single last year and from what I can assume are at least planning an album's worth of material once they can find a label. But onto their song, Svůdcové lidstva, a thirteen minute epic of raw, atmospheric black metal. Despite how visceral and raw this song comes across as, it is quite melodic and atmospheric (since I mentioned two out of those four adjectives in the last sentence), there's a fluidity to it that really helps the song feel like it's moving and not just remain static for its entire length. It's the sort of song where you'll be taken on a journey with lots of tremolo picking, bursts of feedback, unintelligible samples, and a very desolate atmosphere and none of it comes off as sounding loaded to the brim, as if they were trying to cram in as many ideas as they could I mean.
I respect both groups tremendously for not only doing their part to keep DIY black metal alive but also in creating two pretty interesting tracks. It's hard to say that either band really isn't giving it their all on their respective tracks though I'm sure there'll be plenty who prefer one to the other. In my opinion, both bands do great and admirable jobs in their respective styles. Definitely support underground black metal and check out both bands here.
Overall Score: 8
Highlights: Beneath The Somber Halls
Posted by maskofgojira at 3:44 AM