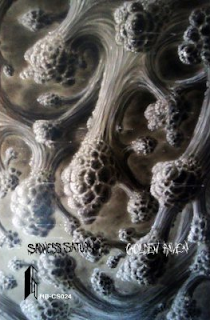 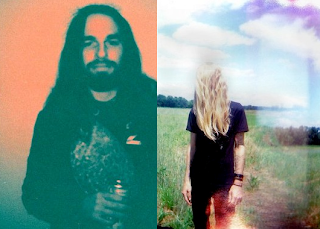 This one is for all those people who wonder what the two guys in Servile Sect do on their days off. Between their work in the fantastic Servile Sect, the experimental noise of ITHI, or atmospheric black metal in Ash Borer, both members, Nate and Luke, have solo projects. As far as I know, both projects are still very unknown, and I believe it's actually Golden Raven's first release (please correct me if that is not the case), and Sadness Saturn's first release in a couple of years.
I guess the most natural place to start is with Sadness Saturn, Luke's project. Of the two projects on here, it is easily the most aggressive and harsh. The two tracks that comprise Sadness Saturn's material is a pretty far cry from the work that Luke has helped to produce in Servile Sect, it's far more lo-fi and cold sounding, recalling a bit of that great sound that comes from groups such as Trist (Ger) or Lunar Aurora in its atmospheric qualities. Though it's hard to say these songs are really black metal per se, they certainly have more of a black metal mindset. While Impermanence In Chains is a rather quality piece of black metal for the most part, the use of an almost doom-esque breakdown near it's end does draw attention than perhaps any other point during that track, while The Dark River of Self-Destruction retains a more droning noise quality. The entire A Side of the tape which houses these two tracks does an excellent job at presenting them as a single unit, of sorts, that does allow the two tracks to feel rather destructive when listened to from start to finish.
Golden Raven is a far more abstract affair in comparison though. Removing pretty much any sense of black metal, or metal in general I should say, from his sound, the four tracks that comprise Golden Raven's side of the split are much more mysterious. Focused, more or less, on droning synthe lines and haunting ambiances that really do bring back memories of the cosmic trips that Servile Sect has explored throughout their career. Closer to the synthe odysseys of the late 70s and early 80s than anything else he's done before, Nate proves with these four tracks that he is truly a master of synthe textures and cosmic soundscapes. It's a trip through the universal ocean, ebbing and flowing, never staying in one place, and I do mean that as a compliment. Don't come into this expecting to hear tracks that are like the A Side of Servile Sect's TRVTH, as they really are different beasts, but think of this as another conquest into the unknown spacial drift.
Who among us is going to deny that even if you're not a fan of these tracks that the projects themselves are interesting and at least have a good range of ideas. I'm not sure if it's gonna be for everyone, even the diehard Servile Sect fans, but those who are into more spacey forms of ambiances in two different forms will surely get enough bang for their buck. Not quite as mind-bending as their main squeeze, if you will, but definitely a worthy addition to any abstract black metalhead's collection.
Overall Score: 7
Highlights: Impermanence In Chains, Bear Forest
Posted by maskofgojira at 7:58 PM