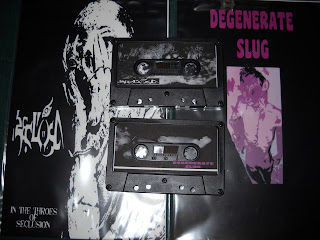 I, like most people, probably had a typical introduction to the sounds of industrial music at an early age, through the huge Nine Inch Nails. I don't think I'll ever say that industrial music will ever be my favorite genre in music, but I would say that within the last year or so I have discovered quite a few groups that have given me a new perspective on the genre. Far cries from the more sanity hatred of NIN, these two projects on this split lurk underneath the mainstream idea of industrial music and have the filth and grime that many may have forgotten about.
I'll just point out first of all that before listening to this split, I was not familiar with either of these projects. Starting off with Reclusa, who apparently started as a side project of his doom metal band Diseased Oblivion, decided to take things into a more grimy and disgusting realm of sound. While the doom element is still very pervasive within the five songs contributed, the influence of industrial music is very up front as well with the use of electronic drums, tons of effects placed on the vocals, and a very mechanical sound. It's also worth pointing out that while certainly doomy, atmospherically and occasionally in heaviness, it has a much more filthy and cold sound than a lot of doom groups do, imagine music you'd hear in a sewer, and I don't mean that in a bad way. It has that industrial grime to it that lends itself to a very mechanical, but filthy, sound that reminds me of sewage.
Degenerate Slug on the other hand is a new project and this is its first official release, but I'm just assuming that. In comparison to the industrial doom of Reclusa, this is far more abrasive and intense sounding. Each of the four songs contributed are far more noisy and unsettling pieces of industrial rock that propels itself forward while constantly evolving into some more harsh. Having said that, a song like Deranged is probably the most accessible thing on this split by far due to its more simplistic structure and rather "catchy" vocal melodies. What might come as a shock, as it did to me, was that most of these songs were actually quite immediate, there was something in all of them that I could latch onto and remember quite easily. It might not be the best thing to say this but in a sense this is like pop music, only a lot more noisy and weird, because the songs are very rhythmic and simplistic while still providing something easily to latch onto.
It's a solid piece of work for both bands that I think have the ideas to cross over from metal and into industrial and noise, or the other way around. At the very least, both bands are interesting and are worth at least listening to once. It's not gonna be the hit of the century but it's by far a lot more creative and interesting than I first gave it credit for, so I can say that it's at least a very solid piece of work.
Overall Score: 8
Highlights: Penetrate, Life From Lifelessness, Deranged
Posted by maskofgojira at 10:14 PM