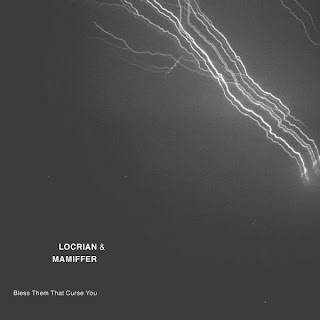 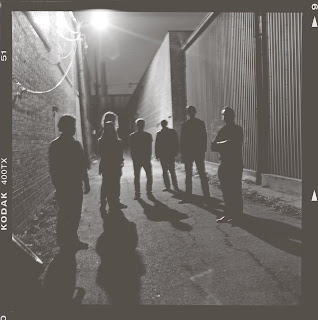 What we have here is a collaboration between two of the most interesting and exciting groups within the underground (insert genre names here) scenes today. Both Locrian and Mamiffer released great records last year (both of which wound up within my end of the year list by the way) and exhibited musicians at the peak of their musical creativity and performance abilities, so to hear this was coming about after those stellar releases did nothing more than make my heart just about jump out of my chest in anticipation. I don't think there was a fan of either band who will come into this with anything less than the highest of expectations, does it meet them?
I have to admit that until earlier today when I was listening to the album through in my car, I really didn't get the whole collaborative vibe of this record, then, it just snapped and hit me. It was like a revelation and I finally heard it, I could hear what both bands were bringing to the table on a given track. Before, while I certainly enjoyed the album, without question, I did feel like there were some spots that did just feel like both bands were kind of doing their own thing, with opener In Fulminic Blaze being the only real point where a collaborative nature felt palpable. The title-track made me think more of Locrian's blackened drones that kind of took off from where The Crystal World album left off while the closing epic Metis/Amaranthine/The Emperor felt more or less like Mamiffer and House of Low Culture. Like I said, none of it was bad in the slightest, but the air of collaboration didn't hit me until earlier today.
Aside from that one problem which I have overcome, I do feel like this album's true potential has just been thrust upon me and I am only now seeing it for the masterpiece that it truly is. Since this morning I have been listening through this album, being sick and staying home does have some perks since I've been able to listen and ponder over this album for pretty much the entire day, I believe I have only scratched the surface of the majesty that this album evokes. It is truly a spectacular listen with both sides coming together and really creating something extraordinary. Like I said above, I had initially viewed this more as a handful of odds and ends kind of material that didn't really reflect a collaboration, but that revelation revealed to me that air and those traits that neither band on their own really has. The air that just permeates these six tracks just pushes the album into a realm that I do believe neither band could have harnessed on their own, despite how amazing they both are. It is that air that holds these tracks together in my opinion since no one piece is exactly like another on here.
In my opinion, it honestly feels like working with each other kind of reigned in both group's tendencies to kind of craft long and winding epic pieces of music. The music on here doesn't have the intensity or brutality that Locrian have been able to utilize in their work, but it isn't as noir or sensual as Mamiffer, and not as free-minded as I personally believe House of Low Culture is on their releases, but it provides a sense of melancholic calm within the listener while listening, and I don't think I have ever felt such a feeling when listening to an album before. The entire atmosphere that surrounds this album, from the artwork to the music, is deeply chilling, and I don't mean that in a bad or cheesy way, but more in the way that the music really does sound like how the cover looks, bleak and haunting, memorable, but instantaneous, natural but controlled. If this is the void staring back at you, don't ever look away from it because it is a magnificent sight to behold. Though it probably isn't the most going to be the most obvious choice, I actually found that the shortest track, Lechatelierite, was possibly the most effective track at harnessing emotion from me. It's cold and somber instrumentation combined with an overall quiet and simplistic performance really struck a chord with me and hit me in a way that no other track on here did.
I expect that those who dislike freeform and structureless music will most likely hate this album, which is a real shame because this is one of those albums that I truly believe works best when you aren't trying to find something to like about it. In my mind, I see it more as a sort of shapeless album that is able to morph itself into whatever you happen to be feeling when you listen to it. I don't mean for it to sound like it will conform to you, but depending on how you approach will shape what you hear in it, and that is a truly rare and magical thing to find in music. It would be a shame if you didn't take the time to listen to this album, it's beautiful and haunting in all the right ways and I don't anticipate many other albums coming anywhere close to this one if a very long time.
Overall Score: 10
Highlights: Every Track Is A Highlight
Posted by maskofgojira at 3:38 PM