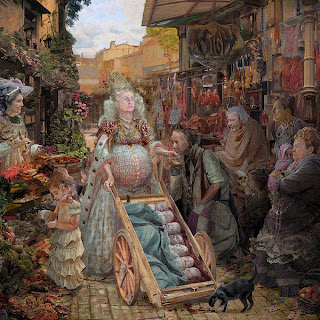 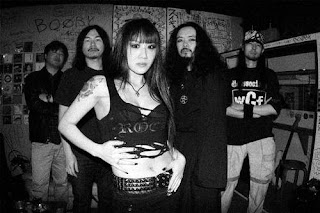 Let's get this straight, I am a fan of Sigh, despite my feelings toward their last album, and have been a big fan of the band since I first heard them back in 2008. I'm a big advocater of Japanese music in general, so at the time, finding a black metal band from Japan was just amazing and Sigh is just a totally off-the-wall sort of band, I was fan right away. Since exploring their other albums, I've obviously been drawn to some more than others, but I can't say I was ever not a fan of the band. With this new album, I had only heard two songs before hearing this entire album, and I just knew it was going to be fantastic.
To start off, I'll just speak my complaints towards 2010's Scenes From Hell. In my opinion, musically, I think it's a pretty solid album, not the band's best, but still a very solid album. My problem lies more in the production, mixing, and mastering which I feel pretty much ruined the album. The guitar and drum sounds on that album are terribly tinny and lackluster when put up against even the band's first couple of albums. Then there was the matter of the orchestration, which happened to feature quite a lot of brass, which I'm not exactly the biggest fan of in heavier forms of music, which dominated most of the foreground of that album along with the vocals. The mixing and mastering job was totally botched in my opinion and it left that album sounding really corny and synthetic, and they used a real brass section, in my opinion. But let's move onto this album.
Once opener Purgatorium begins, there was an immediate smile put upon my face. I knew immediately that this was going to be an album that encapsulated everything I love about Sigh and wrapped it up in a concise package. In my opinion, while every Sigh album is different, I have felt that every two full-lengths they release can kind of be placed side-to-side before they shift, whether it be their first two albums which were arguably their most black metal releases, then Hail Horror Hail and Scenario IV: Dread Dreams which in my opinion their most progressive and avant-garde, followed by their two more progressive rock and traditional heavy metal influenced records, and then their last two which were more in the symphonic and orchestral style. This album has a bits from all of them and just makes it such an enjoyable album. I also have to say that before writing this review I had gone back and listened to a lot of the band's older albums, and while all of them have that blues-esque sort of riffing to them, there are songs on here that are the most bluesy I've ever heard the band. I also have to say that I never expect Sigh to ever experiment with sound collage music either, which is used to close out a couple of tracks on here.
Personally, I love records and bands that are just quirky, hence two of my favorite bands are Faith No More and Mr. Bungle, and this record has that quality down pat. There are moments on here that are straight-up weird and insane sounding, The Transfiguration Fear Lucid Nightmares for instance which features hand-percussion, hand claps, and 70's organ and sax solos among other things all within it's just under five minute running time. There are songs on here that sound like Sigh lifted a page or two from Mr. Bungle in my opinion, and that's not a bad thing at all, where they just change things up so much it's almost absurd and laughable, but all the while absolutely amazing. Tracks like Somniphobia or Far Beneath The In-Between just throw any and all ideas of being straightforward out the window and are pretty much the epitome of avant-garde metal in my opinion. However, with all the above being no less true, I feel that it should be said that no matter how off-the-wall most of these songs are, there are always melodies that recall NWOBHM or even classical music which allows most of these songs to be inherently catchy in some way, at least that's how it worked for me. All throughout this album there are certain melodies and orchestration choices that definitely made me think of noir film making. Amnesia just screams of 40s late night vibe from films like They Drive By Night or The Woman In The Window; and I just love that vibe from it.
Screw traditional songwriting, this is the sort of record I get a rush off of listening to over and over. The excitement of things always changing and just sounding so bizarre just gets me off and is a thrill that only avant-garde music has provided me with. I'm fully aware that this won't be for everyone, but this is the sort of stuff I just love so I have to give this the highest of recommendations to anyone who likes their metal weird and totally experimental.
Overall Score: 9.5
Highlights: Every Song Is A Highlight
Posted by maskofgojira at 12:14 PM