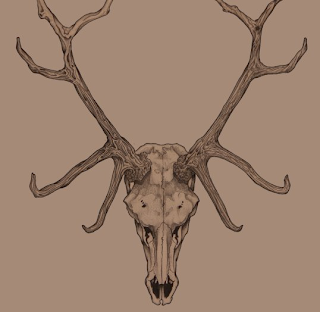 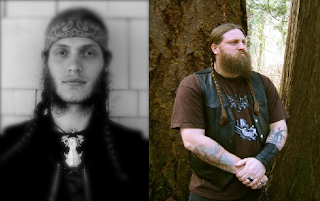 Within the underground black metal community the two artists on this split are held in quite a high regard. Though I am not all that familiar with At The Head of The Woods' album, I know that it is thought of very highly, and I am a fan of Blood of The Black Owl and I am aware that it is a project that has garnered quite a notable amount of acclaim for their last few releases. This collaboration has been planned for a little while as far as I know and the always great Handmade Birds was able to get their hands on it to release it.
Since there are only two tracks on here, it should be obvious that each project contributed a single song, so starting the album off is James Woodhead's At The Head of The Woods. This track, the shorter of the two by about a minute, is the first new material, I believe, he's released since the project's debut in 2008. The track itself is very solemn and contemplative but instead coming off as more ritualistic piece of doomy post-rock. Like post-rock, the track builds, but it's more of a subtle build that steadily climaxes and falls throughout the course of its twenty-four minutes. I won't deny the influence and inclusion of drone and ambient music in the track though, as the track contains large portions of relative minimalism within it. What probably caught me most off guard about the track was the almost Led Zeppelin-esque guitar sound that was used throughout the second half of the track. I'll admit that it might just be me, but it really did bring to mind Zeppelin for me and I found that entire second half of the track to just come alive in part because of that guitar sound and how it was played. I really enjoyed the track even though it was pretty different from what I was expecting it to sound like.
By comparison, Chet Scott's Blood of The Black Owl track is far more solemn and meditative than Woodhead's track. If you've heard 2010's The Banishing Ritual, the project's latest full-length (though the new one was supposed to be released last year), it becomes clear that this track was definitely recorded during the same session. It contains similar ideas while not being as "heavy" as that album was, but definitely retains the cold and dark atmosphere from that album. Despite the project's beginnings in funeral doom and black metal, and various combinations of those genres and sub-genres, the project's most recent outputs (once again, haven't heard their supposed 2011 album yet) has been dwelling much more within the realms of ritualistic ambient music, dark ambient drones, and the occasional heavy doom part, but metal has been left, for the most part, behind with the recordings from at least this session. While most of the track is, honestly, pretty monotonous, there were a couple of things that did catch my attention and perk up my ears when I heard them, including the sparse acoustic guitar, organ, theremin, and flute lines that littered the track.
I do like this release, overall, though I definitely see that it can be a bit lengthy and a bit of a tiring listen if you're not all that into slow moving, rather quiet music. Despite it's good intentions and interesting ideas, it will likely be more of a fan-favorite sort of release, and most likely won't end up being a huge mark in either project's discography. It's certainly not a release for everyone, but if you can appreciate what I think can be termed as "ritualistic ambient" music, or my own term "shamanistic doom", than I think you'll definitely find something in either, or both, tracks to appreciate.
Overall Score: 7.5
Highlights: Here I Stand
Posted by maskofgojira at 10:41 AM