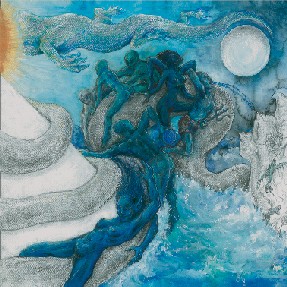 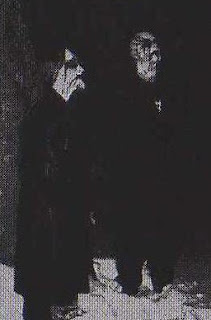 Hearing someone talk about cosmic black metal can be a very odd thing. The cosmos, so vast as it it, seems like it'd be hard to try and personify within a black metal context, yet plenty of bands do it, several do quite well actually. While various styles of bands have attempted to give a sound to the infinite blackness that is space, Rahu has definitely been one of the most traditional in their approach, which might sound odd seeing as it houses a member from Circle of Ouroborus.
You'd think that for how prolific Atvar has been in his other projects that Rahu would have built up a larger discography by now, but what we have here is the project's debut full-length, following the self-titled compilation from 2010 which included the project's first two demos on it. In the four years since their last demo we have heard nary a peep from the project until this full-length was announced. Upon listening to it, it becomes obvious that a sizable improvement has been made to the band's sound. Musically, the duo still retain their raw and melodic take on black metal, but it's a lot more focused sounding than their previous work. In my opinion, this album sounds like the result of the duo taking elements from their first two demos, mixing them together, and getting some better production. It's an album that retains the melodic guitar lines from their Ride of The Eight Black Steeds demo but has the better songwriting from their Caput Draconis demo. The production, while still fairly rough and raw sounding, is a lot clearer than their demos and does provide a more accessible listening experience and one that is certainly a lot easier to get through on a single listen, in my opinion.
Despite only housing five songs, this album is actually quite strong; and with every track topping six minutes, each and every moment is used efficiently and to bring about nice dynamic shifts within a song. It's obvious that the duo are capable musicians as they know that blasting and all-out aggression for a full forty minutes (in this album's case) is just boring and can leave an album feeling very one-dimensional in some cases, but the use of more mid-paced passages and more melodically driven parts do help the more straightforward parts to drive the songs forward. Despite how straightforward these songs are, don't expect any left-turns on here cause it does stick pretty close to the traditional black metal sound here, they all carry with them a weight of good songwriting and precise melodies. Personally, I actually enjoyed Kobalt's drumming on the album as he made good use of his toms to add some nice tribal patterns to otherwise rather standard black metal parts. While his rasps are far from unique, they are by no means bad and certainly stick out when he decides to start screaming. It might have served the album better to mix up the vocals a little bit more, but it's a black metal record, it's gotta have at least some screams.
I was actually very surprised by how much I enjoyed this album, despite coming into it expecting it to be good, I was very impressed by it. It's not a huge departure from their older material but I don't think it's really meant to be, and it succeeds at pumping out five solid, melodically driven, black metal songs. It might not describe the bleakness of the cosmos, but it's certainly going to be an album that I'll be replaying for a while. Definitely check this out if you're at all a fan of underground black metal.
Overall Score: 8.5
Highlights: Ordeal of X, The Serpent King
Posted by maskofgojira at 7:32 PM