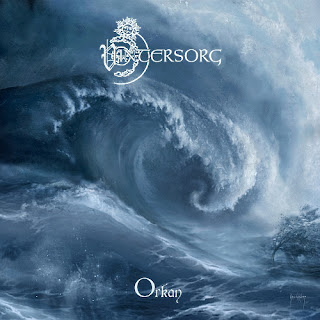 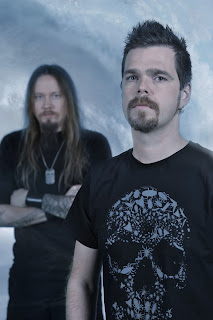 Vintersorg is one of those projects that just seems to change after a few records. I love the mainman (Andreas Hedlund) and most of his projects but it's obvious to see that his heart tends to always come back to this band for his most creative ideas. I wasn't all that keen on last year's Jordpuls record, so I wasn't really all that excited about this record, but I always want to hear good things from Vintersorg (conflicting feelings, I know).
This was an interesting album for me to get my head around. It wasn't the same weird prog-metal that albums like Visions From The Spiral Generator or The Focusing Blur were, but instead, more of the progressive folk metal that Vintersorg has been experimenting with on his last two full-lengths. The reason I say it was interesting was because when I first skimmed through the album, I was really not all that into it. All I heard was a lot of the orchestral side of the album, and it didn't really hit me as being anything great. I can't say I came into the album expecting too much anyway since I wasn't overly into last year's Jordpuls, but on every consecutive listen after the initial skim proved to really catch me off guard.
I guess I should just point out, if you weren't aware of it already, that despite this album and the two that came before it are folk metal albums, it's far more metallic and aggressive than a good percentage of what's typically called folk metal. You'll find references to Hedlund's past in black metal throughout these more recent albums. I just felt the need to clear that up for those who were expecting something peppy and party-esque because of that folk metal tag. Aside from that, in terms of the tone of the record, though none of the albums the project has turned out have ever been too dark sounding, the one on here is downright upbeat in my opinion. It's still nowhere near that happy-go-lucky, drink and party stuff that makes me want to puke, but these songs are actually quite uplifting. I wouldn't call this album sugary or bright sounding (like Anathema, who I happen to love) but there is very little on here that brings to mind darkness or hatred, which would certainly account for the clean vocals having a larger presence on here.
To return to my first impressions of the album for a minute, while I do think every album is worthy of several listens before review, this is one of those albums that gave me something different every time I listened to it. The first listen supplied me with pretty much the first thing I heard while skimming through it, the more orchestral and symphonic bits, and you know what, those sections were actually really well put together. The second listen provided what I guess would normally stand out on a first listen, the vocals and the choruses, which were surprisingly memorable. The third time then had the riffs stand out to me. After the first three listens it was only smaller inflections of them, though no less impactful. It has to be said that this is probably the most catchy and most memorable a Vintersorg record has been since 2000's masterwork, Cosmic Genesis.
While I don't think it tops the performance he did on the Borknagar record from earlier this year (which is still great) I do think this is the most consistent and most memorable material Hedlund has released under this project in some time. It's easily some of the best folk metal (sub-genres aside) I've heard in some time and stands out among his discography for being so well written and performed. Definitely worth looking into if you happen to enjoy interesting folk metal.
Overall Score: 8.5
Highlights: Ur Stjärnstoft Är Vi Komna, Myren, Urvädersfången
Posted by maskofgojira at 2:23 AM