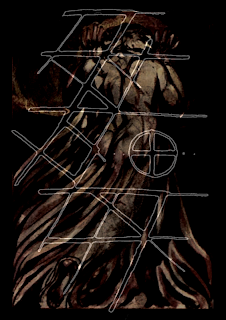 Who can really say what Venowl really is? Throughout their relatively short history they've released numerous small albums that range from extremely raw black metal to funeral doom to straight-up power electronics, saying what any new release will sound like can be kind of like shooting yourself in the foot. So when I got this copy of the group's first "full-length" I kind of had to let any preconceived ideas fall to the wayside.
For those who haven't been following the sonic trajectory of the band known as Venowl, I think it's time to get acquainted with it. Their start in the realm of power-electronics meets black metal harshness is easily some of the most powerful music to emerge from the blackened noise sub-genre, though to say it isn't headache inducing in large amounts would be lying. Their evolution into Senthil-esque blackened funeral doom has been a turn for the better, in my book, and while I don't particularly care too much for the music Senthil have released, I find that Venowl take a much more visceral approach to their performances. For those who aren't aware, this is improvisational stuff, so if you're not into that, you've been warned. The three tracks that comprise this debut full-length are long, ill-disciplined, and unruly pieces of blackened funeral doom, and I mean that in the best possible way.
Ok, I know that saying a song or album is long probably isn't going to bother a whole lot of people, it's more than likely going to be the ill-disciplined and unruly part, so let me explain. I say it's ill-disciplined and unruly because it's freeform music, to say there's anything on here that is meant to be ear-catching, memorable, or melodic would be a far cry from the truth if I ever heard it, and while I, and I'm sure some others as well, find elements of that to be a rather endearing quality, I doubt that it's something that's going to grab a bunch of people. Oh, and before I move on, I guess I should clarify that when I say it isn't memorable, I mean that unless you find droning guitar riffs, vocals that sound like a person being murdered, and slow-paced drumming catchy, you aren't going to remember a single part of this album, if you're anything like me, you'll remember, and come back to this album for, the experience of it. A lot of what's played is really slow, and when it speeds up it does have the tendency to turn a bit chaotic (which may have been the point). I don't dislike it for the fact that it comes off as messy, I just think that it could have come out so much more cohesive (once again, maybe not what they were aiming for) and cleaner which could have benefitted those sections.
In saying that, I find it almost odd how the shortest track on here is also the most diverse. Hung Alive By The Ribs to A Gallows is slow, just like the other tracks but shows a bit more of that black metal side that Venowl have been toying around with in some other recordings. Closer The Bounded Are Loathed is an epic, reaching almost thirty minutes, that really shows not only that Senthil influence but I'd also say a bit of Khanate as well, especially in its second half. The long droning section with screams coming at you from seemingly everywhere really reminded me of the horror that Khanate fills me with at times. It's not the section where a bunch of stuff is happening that is the most exciting but the parts where very little is that just send that shiver up your spine because you're not exactly sure what's going to happen next or when it's going to happen.
It's an interesting album because for all its flaws I still have to give it to the band that they always kept me interested and wanting to listen. Call me crazy for saying that this actually can be an enjoyable experience. It's definitely worth checking out if you happen to enjoy extreme forms of doom and black metal. Not for the faint of heart.
Overall Score: 8.5
Highlights: The Bounded Are Loathed
Posted by maskofgojira at 7:02 PM