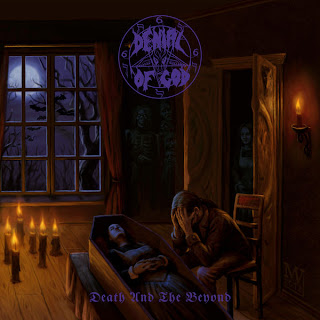 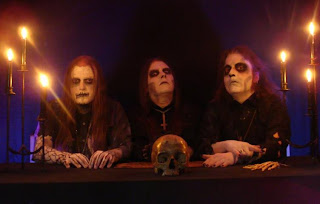 I wasn't really sure where to begin with this one. When I saw the cover I imaged that it would be some sort of retro death metal album, little did I know that the band was actually a black metal band after looking them up. Even coming into the album though, it was a lot different from what I expected.
This was sort of a weird little album for me because with the above statement leading me to believe this was one kind of album and it really being another, and then me actually listening to the album and it being different than I expected, it's been a rather odd experience. Musically, these guys bring an interesting, at the very least that's what you could call it, version of the atmospheric black metal sound. In a way, it kind of reminded me of last year's Stained Glass Revelations album from Negative Plane in that it was a black metal album that had all these weird psychedelic and progressive kind of ideas, though this album isn't nearly as overt with them as Negative Plane was. Sonically, this is still pretty rooted in early Venom, Burzum, a little bit of Mayhem, along with some other stuff that is a bit harder to really place, there are ideas that definitely belong to the first-wave of black metal, what with a ton of thrashy riffs being used throughout, but there are also ideas that are very modern as well. Some of the tremolo sections reminded me a lot of a group like Krallice while a lot of the melodies are actually quite neo-classical like, which was a little odd. It was a very strange mixture of ideas.
I was quite impressed with the diversity exhibited throughout the album, each track has its own feel and vibe while it's consistent in mood throughout. Whether it happens to be a straightforward early blackened thrash kind of track, hear Funeral, or a more progressive track that utilizes space as much as intensity, The Cursed Chamber, the band is well versed in their craft and know what to do show it off, and I mean that in the best possible way. While I do think that some of the tracks are a bit too long, most of them are around the nine minute mark, they all at least bring some thought provoking ideas and structures to the table. Chances are that if you're not keen on one section of a song, another might entice more, at least that's how it was for me. The band always try and mix things up by including things like cleaner passages, more doomy riffs, neo-classical melodies, more trippy atmospheres and stuff like that into the mix, so I think the longer song lengths are justified, but whether you can endure a song for that long is another problem. These aren't like super progressive or avant-garde epics where you have multiple ideas coming at you in the same song. Most of these tracks have several ideas and a central theme that they return to, hence, you could say that it's more of a song than what many avant-garde groups tend to produce, but I do think that there are moments that do drag on here.
I think that if you're a black metal fan and you can accept a healthy dose of experimentation in your albums/bands, you'll find a pretty cool album here. Though it did take me a little while to really get into the album, it did turn out to be an interesting listen. If you like black metal records, check this one out.
Overall Score: 8
Highlights: Behind The Coffin's Lid, Bones Turn to Dust, Pendulum Swings
Posted by maskofgojira at 3:41 PM