What we happen to have here are three pretty old albums that I've wanted to cover for a while, and had planned to get to earlier, but you know, one thing leads to another and time got away from me. Anyway, here's some nice semi-new death metal for you to enjoy if you haven't already. 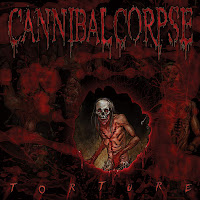 I know I'm probably inviting some form of criticism by saying this first but in my opinion, Cannibal Corpse is one of the very few death metal bands, like "pure" death metal, that hasn't released a bad album. There isn't an album from them that I don't like in some way or form. Obviously some are better than others and I have songs I favor over others, which is natural, but there isn't any album that I have yet to dislike in any way, which is more than I can say for the likes of a group like Six Feet Under. But onto this album. Sonically, the band haven't really gone outside of their comfort zone on this album any more than any of their other albums, but they still manage to create an album that is diverse with songs that blast forward and songs that sluggishly lumber around, personally, I prefer the ladder. Tracks like Scourge of Iron and Intestinal Crank are serious highlights with some seriously heavy chugging that is far superior to anything I've heard from any deathcore band with breakdowns. While I was enjoying the album, it wasn't until track seven, Followed Home Then Killed, where it really grabbed me and showed me that the band were ever so slightly bringing in a more atmospheric vibe on some of these tracks, which can be noticed on repeated listens. It's not on every track, but the slower ones definitely have a darker kind of mood to them that I don't remember hearing on previous albums. The second half of the album really does have a lot to offer in terms of variety, the first half was a bit on the faster side of things, with more manic riffs, weirder bass parts, hear Caged... Contorted, more tempo shifts, and an increase in that darker atmosphere I just mentioned. Another great album from Cannibal Corpse, definitely check it out.
Overall Score: 8.5
Highlights: Scourge of Iron, Followed Home Then Killed, Caged... Contorted 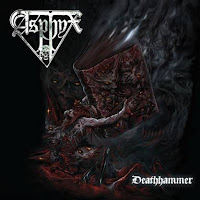 Well, if nothing else, you can always expect Asphyx to deliver a record of crusty sounding death metal. No super polished or metallic sheen on here, it's a raw and dirty sounding record, but still produced enough to sound modern, which may be a bit contradictory, but if you heard their last record, 2009's Death... The Brutal Way, you'll know what to expect. Sonically, this is a bit more of a "brutal" than their last album, meaning that there's not as much of a doom vibe on most of these songs. Maybe it's just me, but did anyone else think that the title-track, Deathhammer, sounded similar to the classic Venom song Black Metal? Nevertheless, it's still a good song. It was a little weird listening to this album for me because not so long ago, I could not stand Martin van Drunen's vocals, but now not only do I enjoy them, I tend to actually like bands more when they have vocalists that sound like him. It's nothing new and if you've listened to at least a dozen death metal records in your life, chances are you've heard something similar to this before, but that doesn't stop it from just plowing forward and cranking out some solid death metal anthems. It gets a little stale near the end, but I'd still recommend it for any and all old-school dm fans.
Overall Score: 8
Highlights: Deathhammer, Der Landser, We Doom You to Death 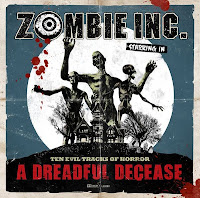 Ok, unlike the last albums, this is not an old band, but is a newer one made up of members from older bands. How many people remember groups like Disbelief, Pungent Stench, or Fleshcrawl, those sorts of bands, and what we have here is the debut record from a bunch of guys who love death metal and wanted to make a record to describe the downfall of the world. Now, unlike what the above two albums did, this album actually breaks from the straightforward brutality and actually changes things up a little bit more than I thought they would. There's melody, Deadtribe Sinister, there's an clean guitar break, Horde Unleashed, and some more sludgy riffs, Bloodrain Overdose, but it all works together. Sure, some of the samples are a bit on the cheesy side, but they aren't overly stupid or misogynistic so they didn't really bother me. Honestly, it really isn't all that unique compared to other death metal groups, but for a debut record, I definitely have to say that the band have a great dynamic already and are definitely on the top of their game when it comes to songwriting. It may not top any year end lists, but it's a hell of a record and if you're a death metal fan it's definitely recommended. On a sidenote, I was not aware that this album was released last year until I had already started writing this review, I know I'm breaking my own rule, but screw it.
Overall Score: 8.5
Highlights: Horde Unleashed, Grim Brutality, A Dreadful Disease
Posted by maskofgojira at 8:23 PM