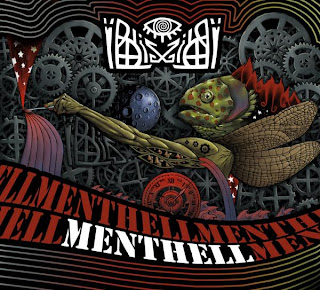 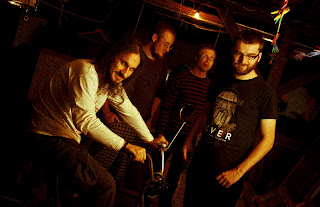 I was emailed about this album a couple of months ago and based on the style that the band told me it was alone, I knew I had to hear it. Since then I guess I've just been putting it off and putting it off until recently. It's just one of those things that I just needed to have some time to really sit and focus on it to really finally get it.
As I've said before, some of my favorite groups, ever, are bands like Faith No More and Mr. Bungle, but alongside that I have a love for all things quirky and weird musically, whether they happen to be the funk-rock of Primus or the overly technical prog-metal of Spiral Architect. At this point I'm sure you're wondering what most of these bands have to do with this album, and, at the core of it, not much, but the reason I bring them up is the presence of bass in their music. When I first got this album and based on the description the band told me, I was expecting something totally different, especially when they used the term post-black metal, I tend to associate it more with the post-rock influenced side of black metal than the weirder side (to which it's better suited for anyway). This is pretty far from the likes of Alcest or Fen and closer to what I'd imagine a fusion between Spiral Architect, early Solefald, and modern Satyricon would sound like, with maybe some added quirkiness from any of the bands mentioned above thrown in as well. It's totally weird.
To go back to the whole bass connection quickly though. I love bands that have a strong presence of bass in their music, even if it might take me a little while to get used to it, they wind up being some of my favorite musical acts. This band is no different. Musically, it really reminds me of Solefald's pension for weirdness while having the songwriting chops of Satyricon. So, you have pretty concise and structured like straightforward rock songs, but aside from that, the music bounces from traditional black metal to fusion to hard rock, hell I'll say funk rock just to throw that into the mix as well, hear Origin. With the number of bands coming out these days, being original, in terms of just doing something no one else has done not necessarily just doing something unique in a genre, but something unlike anyone else at all, is getting exceptionally harder and so when a new/new-ish band comes out with a record that is unlike anything else I have heard, I love it.
But like so many things, a vocalist in a band like this has to fit the music, and if they don't it can leave the entire album feeling rather bland (which has happened in the past believe it or not). Luckily for anyone who checks out this album, the vocals prove to be just as eccentric as the music. I really have to commend Zgred for the wide array of techniques and styles he uses throughout. You have your standard screams and growls but you also have more punk-ish bellows, off-kilter crooning, barking, slobbering (not kidding!), whistling, and many other forms of vocalizations. How he managed to make lyrics to fit music as weird as this is a marvel to me but he does it and I have nothing but good things to say about his performance on here. I will provide a warning to anyone who checks this out that there is the potential that you may not like the vocals, I know that there are some who don't enjoy eccentric vocalists, no matter how much they enjoy the music, but do not let that stop you from checking out this album.
It may be because I love weird bands for the sake of being weird, but this band also has songwriting chops which leaves several tracks stuck in my head in one form or another. I really hope people check this out because there really need to be more bands like this one who take chances at just doing whatever they want. Highly recommended, go get this now!
Overall Score: 9
Highlights: White Claudia, Don't Eat My Legs, Origin
Posted by maskofgojira at 2:22 AM