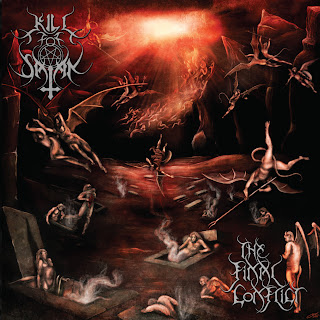 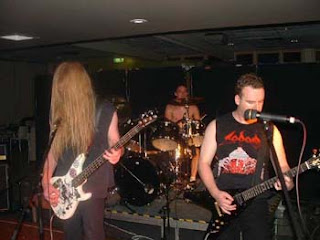 By the name alone I knew that I had to cover this album. How could I resist a band with a name so blatant and blasphemous, it was like a no brainer. It's extreme metal, it's a middle finger to all things Godly and virtuous, of course I'd have to at least listen to it.
Maybe it's just me who thinks this way but as someone who's listened to a decent amount of bands with names as blatant as this one, I was expecting something pretty straightforward, brutal, and intense. I was thinking of something more along the lines of bands like Angelcorpse, Dark Funeral, or Blasphemy, that's not what I got. Sure, this is still pretty straightforward and the tricks used on here aren't going to surprise you if you've heard bands like the ones above and explored the death and black metal genre to a pretty good extent, but this was surprisingly varied. As the bands above should exemplify, I was thinking this would be like non-stop blast-beats, or at least constant intensity, but the band exhibit a good range of ideas on here, through the use of dynamics, technicality, and melody. Granted, there's still a very healthy dose of your traditional death and black metal blasting on here, but it's nice to hear a band mix it up with some different ideas now and then.
While the first two songs on here are pretty full on blackened death metal tracks, with traces of the aforementioned other elements thrown in here and there, track three, Litany of The Wretched, is really where the band started to grab me. This song in particular is what made me sit up and take notice of what the band was doing from this point on, and is what made me return to the album again. The song isn't all that fast and is far more spacious with an eerie sort of atmospheric lead melody driving the song forward, I just thought it was a really interesting track. The same sort of atmospheric guitar tone is used later on as well, but more in a typical lead sense, but is still pretty effective. With all that being said, I'm certainly no snob (despite what some may say), I'm perfectly satisfied with simplicity in songwriting. Immaculate Deception is a pretty standard mid-paced black metal song, with slow middle section included, and is one of the best tracks on the entire disc. There honestly isn't a whole lot going on in the song, but it's really well executed and performed and manages to stand out. Hell, the second half of the album has plenty of thrash riffs scattered throughout, and they're not exactly super technical, but they're still catchy. I thought the band managed to mix the three styles (death, black, and thrash) together pretty well, and even though they all borrow from each other often enough, I still feel like being able to transition from an up-beat thrash riff into a more melodic one, hear closer Thy Kingdom Undone, while still bringing in plenty of black metal tremolo picking is an impressive feat.
I wasn't really expecting a whole lot from this release coming in but I was really surprised by it. By the end of the album I could safely say that I enjoyed a very solid blackened death metal album, if nothing else. I highly doubt it'll blow anyone away but it you happen to dig extreme metal (it's pointless for me to be more specific than that) than I think you'll probably find something on here to enjoy.
Overall Score: 8
Highlights: Litany of The Wretched, Immaculate Deception, Origins of Iniquity
Posted by maskofgojira at 3:47 PM