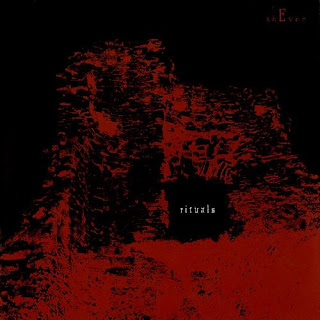 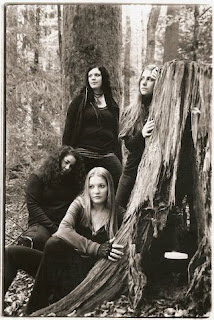 Before I was told about this album by Totalrust Music, I had never heard of Shever before. Apparently the band is pretty well respected from what I've come across, which is a surprise to me. An all girl death-doom band, somehow it's not all that surprising nowadays, but I guess it surprised enough people when they first came out to get them noticed (because obviously people don't listen to music anymore when girls are involved - sarcasm).
Not that it really matters now, but the fact that I even told you that this was an all girl band probably would have surprised you if you had listened to this album before reading this because, honestly, lead vocalist Alexandra has a nice feral sounding scream that sounds a whole lot more brutal than anything I've heard someone like Angela Gossow ever do. I'd actually say her voice, singing/chanting included, is much closer to someone like Ludicra's own Laurie Sue Shanaman, who I have a lot more respect for incidentally. Maybe it has more to do with the fact that I actually like the music backing her more. It's death-doom without sounding too much like the classics, it doesn't hold the sort of primitivism or romanticism that we like to associate with the classic bands and instead has a much more naturalistic kind of atmosphere to it. I don't mean naturalistic in the sense that the production is raw and live, but more that I could perfectly imagine the band writing songs that portray their home environment. Tracks like opener Ritual of Chaos or Souls Colliding were extremely vivid in the world that they managed to convey through the music, it was beautiful but cold and empty. Having looked up photos of the band's home city, I'm actually a little surprised that this doesn't sound all that urbanized.
That sense of majestic beauty coming from huge landscapes is conveyed through riffs that maintain the weight of doom but are perhaps more active (not sure if that's really the right word) than your standard band. There's also a nice balance between the heavier riffs and the more clean passages, which I actually found to be a lot more melancholic for some reason. I think that the band have a nice blend when it comes to the two and it works in their favor especially when it comes to channeling this sort of landscape into music. I know I've brought that up a lot, but the music on here does actually make me envision the mountains, forests, and grasslands that come from their homeland, as cliché as that might sound. Having said all that, there are some moments on here that I just found to be really bland and dull. When this band is good, they are really good, but when they're bad, they're just boring. I guess you could call it lucky that it's actually the shortest track that are the most average and dull of all the songs on here. Je Suis Nee isn't bad, but is just really forgettable and doesn't really do anything extraordinary with the whole death-doom sound. That's not even saying that it needed to be unique, a track like (You Are) The Mirror is a pretty standard affair, it's nothing new stylistically, but it's well done and the main riff and vocal melody are solid and pretty catchy. I think that it's just a shame that there's one song on here that sort of holds back the rest, because aside from that one track, the rest of the album is really good.
As a whole, I really do like this record, which is saying a lot considering I thought half of it was boring on my first listen. It's not the kind of record that'll change the world, but for what it is, it's pretty damn good. I think that if you like doom metal, forget sub-genres, I think you'll find an enjoyable record here.
Overall Score: 8
Highlights: Ritual of Chaos, That He Na Te
Posted by maskofgojira at 10:09 PM