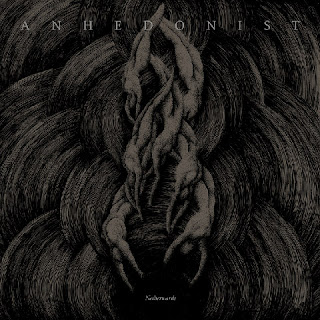 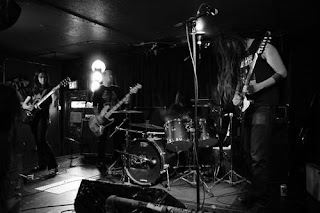 Time for another death/doom album, though one that's been getting a bit more praise than others as of recently. I wanted to cover this for a long while but just kept putting it off until now. I recently put on my Ipod and began listening to it and I think it's about time I finally get to it.
What with the whole cavecore sound going around, any band playing death/doom is subject to a bit more skepticism, and prejudice (but that one's more subjective), than they perhaps would have had placed on them a couple of years ago. Though Anhedonist don't strictly adhere to the same code of conduct that other cavecore groups like Impetuous Ritual or Antediluvian do, preferring for more of an emphasis on slug-paced intensity over atmosphere and angular riffing patterns, they still have similarities between them. There's no denying that the atmosphere on here is very similar to that dank and cave-like ambiance that the groups above, as well as many others, have. What I will say in the band's favor though is that in crafting an album with only four songs that is just over forty minutes, that sound doesn't really become stale or tiring. Along with that, I have to say that when the band pump out a melody, it actually works. Most cavecore groups (and I do apologize for bringing that up repeatedly) don't typically make use of melody, and if they do, I obviously don't remember it, but it works well when it's used on here.
Probably everything that this album is about is all in the last song, Inherent Opprobrium. Being a fifteen minute closer, it should come as no surprise that it does contain a little bit of everything in the band's arsenal thus far as well as experiment a bit more, show a little bit of where the band might go in the future. The short little clean passage that opens up the track is something that I could definitely see the band embracing as a bigger part of their sound in the future, though I doubt they'd ever take it as far as Ahab did on their new album. Once you get into the meat of the track though, the dirge grooves that the band pump out are top-notch and definitely pump the track up to a higher level than the first two tracks would have you believe, but melody is still maintained. I think that it's sort of interesting how the band have been compared to the likes of Mournful Congregation, because the band's are somewhat similar, but as of right now, I don't think that Anhedonist is at the same level of songwriting as their Australian brethren are, though they've had more than a decade to craft their sound so it shouldn't come as any surprise. I do think that Anhedonist could certainly reach a similar level in time though, as this song demonstrates.
Overall, it's a really enjoyable album if you happen to like death/doom. I wish I had more to say on this album, but it's just sort of there, laid out on a plate in front of you and I hope you enjoy it. I can't really think of too much to dislike about it.
Overall Score: 8.5
Highlights: Carne Liberatus, Inherent Opprobrium
Posted by maskofgojira at 12:16 AM