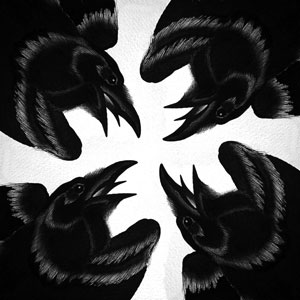 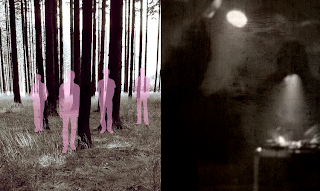 As most will know, I love everything that R. Loren does, from his record label Handmade Birds, to various musical projects (Pyramids, Sailors With Wax Wings, White Moth), and I wind up trying to cover anything he puts out. This is the second release in a coming trilogy Pyramids has collaborated with other artists on, the first being their collaboration with Horseback last year. Like that collaboration, we have only one track on this release expressing everything inside.
As several may already know, I wasn't too keen on last year's A Throne Without A King collaboration between Horseback and Pyramids. While it certainly had some interesting ideas, it felt directionless and more than a little pretentious to me. That's not to say I wasn't looking forward to this release, because I certainly was, but that last collaboration kind of worried me for what might have resulted from Pyramids working with Wraiths. Having only become a fan of them within the last few months I can't really say what I was expecting from this release, but knowing Pyramid's knack for writing superb dream-like shoegaze and Wraiths' ability for crafting drones that have both substance and mood, I hoped for something amazing.
As if to silence all questions and doubts about this collaboration, the track bursts open with one of the most epic sounding doom metal sections I've heard in a good while. I'm going to be really nitpicky here and say that I didn't care for the drum pattern accompanying that section, which is used later in the song, I certainly have no qualms with it. As for the rest of the track, both projects manage to convey a great sense of self and individuality while making the track sound jaw-dropping in its cohesion. The movement of each section is near flawless, moving from doom into dreamy shoegaze and then into pure ambient, and that's all within the first six minutes of the track. I can't tell you how excited I was while listening to this. Each section just worked as a whole and did more than I had hoped. I was actually surprised by how late in the track that the use of actual noise and feedback was used, the track is pretty quiet and makes use of it far more sparingly early on and doesn't give you a full blast until you're somewhere around two-thirds of the way done with the track but unlike the collaboration with Horseback, the drones used here don't feel quite as haphazardly done and work in conjunction with the other ideas present throughout the rest of the track. Having said all of that, with it only being one track (twenty-five minutes long) and I can't help but wish there was more, either that the track was longer or that there were more tracks. But once again, that's a very small gripe.
Overall it's a really enjoyable piece that just gave me everything I wanted and more. I can only hope that the final part in this trilogy of releases is somewhere near this album, in terms of quality, because this is great. As if I need to say so by now but, check this out, it's a must for this year for sure.
Overall Score: 9
Highlights: There's Only One Track
Posted by maskofgojira at 11:38 PM