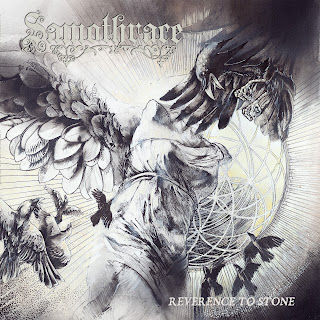 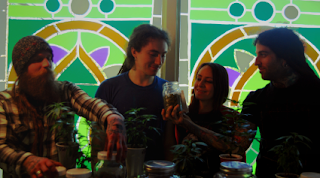 I've been waiting for this album for a good while. Samothrace, believe it or not, was one of the first stoner/doom based groups that I ever got into. Since my first discovery of them three or four years ago I've been waiting for new material, and here it is.
I'll just start off by saying that I am a bit disappointed by the fact that there are only two tracks on here, regardless of the quality of the either of them, I do feel a bit let down by that. For both tracks topping ten minutes, they both pass by almost surprisingly quickly and it's almost a shame that they do because at the end of the record you're just left wanting more. Aside from that, there is very little to complain about on here musically. The band is in top form delivering, easily, some of their best and most interesting material yet. The quality of both tracks is definitely above par and surpasses their material on 2008's Life's Trade album, which is no small feat in my eyes since that was one of the albums that first got me into any form of stoner metal/rock. Granted, since this is just my opinion here, it's hard for me to say this next statement will apply to everyone, but this is the sort of quality I like material from the stoner inflected genres to be at. Not all of the ideas on here are original, but the way they're constructed, performed, and arranged makes them work in ways that very few other bands from that genre manage to.
Opener When We Emerged is an interesting pieces that channels more of a traditional doom sound than the band's crust and stoner inflected ideas would initially suggest to a listener. Not to say that they aren't there at all, but for me, it's more Candlemass than Sleep, though that may be like splitting hairs in this case. This track is the heavier of the two, with the band staying pretty crushing aside from the track's introduction. The closer, A Horse of Our Own, by comparison does call upon more of that stoner vibe, once again, I'm just splitting hairs, but definitely has more blues oriented riffs. The incorporation of a calmer and more atmospheric sections definitely does wonders for the song's structure, lending more weight to the heavy parts. I'd also say that calmer section will do wonders for all smokers out there, as it just sort of has this kind of hazy ambiance to it that makes it feel almost psychedelic. The whole thing ends with this passage that sort of jumps between doom and drone while still maintaining that trippy atmosphere from earlier on in the song. I really don't have a whole lot to complain about with either of these songs, they're both great.
As you probably deduced from the opening of this review, I am a fan of the band and this album didn't let me down, except on one front. It's a great stoner/doom album that is head and shoulders above the band's piers. Definitely do yourself a favor and check this album out, you will not regret it.
Overall Score: 9
Highlights: A Horse of Our Own
Posted by maskofgojira at 12:06 AM