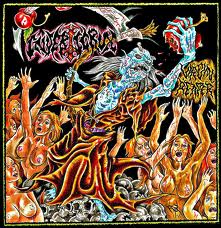 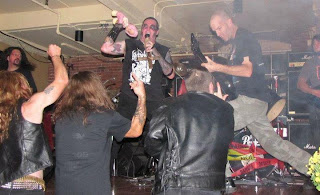 It's an odd thing getting emailed by a band who you know absolutely nothing about and who have very little recorded material for you to go off of, which was the case with Inverticrux. I did listen to some of the material that was out there, but it was like demos, so I was a little skeptical. So, upon seeing the cover of this album, I was pretty nervous.
Call me spoiled but when I see album covers like this, they just don't appeal to me as much as when I see something that is more stark and simplistic (when it comes to album artwork anyway). By the time I finally got around to listening to this record I had long forgotten what my initial impression based on their tracks was so I guess you could say that I was going in fresh. Really the only thing I remembered was that vocalist Raypissed could do a nice King Diamond impression, which ultimately was the reason I decided to cover this. Upon hearing the opening title-track, I started to regret that decision. The raw and rather unpolished instrumental performances were solid enough, jumping between blues-rock and death metal with little regard for any middle-ground was fine, I could look past that and see some great ideas at work, but Raypissed's vocals were plain bad. He certainly has a theatrical side to make him impressionable and interesting, but there were so many King Diamond howls on there that it just began to irritate me. That, and the fact that I thought the lyrics to the chorus were just atrocious (and you know that I'm not much of a lyrical man, but I just couldn't get past them).
After that, the album can only go up, and luckally it does. The band bring in influences from traditional metal, black metal, a bit of goregrind in the vocals, and a couple others as well as up their songwriting chops. While the vocal effects on here are a bit tiring and do become somewhat redundant, hear tracks like Azrael Beckons My Name, I have to commend the band for at least mixing things up. I actually have to be blunt with this and say that even though Raypissed was what made me decide to cover this album he is the weakest link on this album. He is most certainly talented and has a great range, what with both his falsetto howls and his occasional ventures into gurgling and guttural growls, I just felt that all the effects he placed on his vocals killed his performance on here. He's over the top and you can hear it, but all the echo and warped effects do him no favors. A song like Lured By The Scent of Infant Blood really shows what he's capable of and the band is certainly at their best on the track as well, delivering some very melancholic doom metal. The tracks that happen to follow that one are more punk-ish in their delivery, but ultimately less than satisfying after the more lengthy doom track. They're by no means bad, but the band seem to be at their best when their channeling more traditional and doom based metal forms. For myself, most of the best tracks happen to lie in the middle of the album.
As a whole, the album is pretty inconsistent, with some tracks really showing a lot of potential and others just sort of falling flat or coming off as somewhat uninspired. I think there's a lot of potential for the band, but there's still a lot of work to be done. If you want to hear an album that's does a pretty interesting fusion of genres while being rather theatrical vocally, I'd recommend checking this out.
Overall Score: 7
Highlights: A Cautionary Tale, To Serve The Dark Design, Lured By The Scent of Infant Blood
Posted by maskofgojira at 8:56 PM