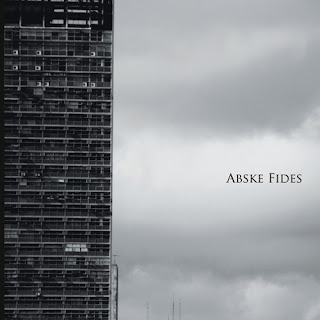 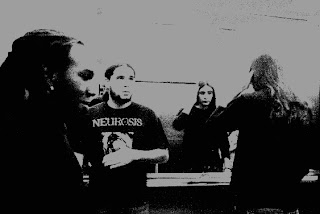 Despite being aware of Abske Fides for a little while now (I'm pretty sure I first found them when I went through that whole dsbm phase a few years back), this is the first time I've actually listened to them. I saw this album around the blogs but didn't wind up checking it out till one of the band members told me about it. I came into this thinking I knew what I was getting myself into, obviously, I was wrong.
Based on the fact that I had seen the funeral doom tag attached to them I expected them to sound like that, slow and heavy, maybe with some more atmospheric stuff. As I, and you as well should you decide to check out this album, found out, this record is so much more than your standard funeral doom record. Sure, it's roots are certainly in the Esoteric and Shape of Despair kind of vein, but influences from the likes of Lantlôs, Blut Aus Nord, and to an extent even Isis come through. While I almost always skim through an album before I decide to review it (just to see if it will interest me) I was genuinely surprised by the riffing on here when I was going through it because it was really cold and sort of mechanical sounding, hence the BAN reference, but was obviously rooted in the doom spectrum. I'd also say that the atmosphere on here is very urban and melancholic, which only adds to uniqueness of those mechanical riffs. I won't deny that some of that could have come from the band's experiences working in the depressive black metal genre, but luckily most of that sound has been weaned on here, making only subtle appearances in some songs through certain vocals, samples, or guitar passages. To reference the vocals quickly though, it's worth mentioning the variety used throughout the album, you have the standard black metal screams but there's also a few uses of guttural growls and whispering, as well as some surprisingly well done singing.
Based on what I had originally skimmed through which was the first few tracks, it was a little weird when the tracks that were closing out the album showed a much more restrained take on post-rock. The influence of post-rock can be heard in all the tracks on the album, to various degrees, but a song like Embroided In Reflections really embodies straight ahead, no nonsense post-rock. It retains the same atmosphere from the rest of the album but is very calm and steadfast in its direction and performance. Though that's probably the clearest and most well defined post-rock track on the album, The Coldness of Progress demonstrates it's influence in a different facet. Taking the rise-and-fall element from the genre and essentially transferring it into a very clean sounding doom song that is somewhat reminiscent of a group like Mourning Beloveth, proves to be a definite standout on the album with its bluesy leads and crushing climax. It's a very interesting track that definitely shows a strong sense of songwriting, though the whole album really shows that if I'm being honest about it, and mood that is rarely found on anything coming from the dsbm scene or new funeral doom groups. It's a very impressive debut.
I really enjoy the album, and while I think it could be a tad more memorable, I can't say I'll hold that against them because the album is just that well put together. Each song has its place and is different from the one before it just enough to make them all stand out in their own way. Definitely a really great first full-length for these guys, here's hoping they can write another album like this for the follow-up.
Overall Score: 9
Highlights: The Coldness of Progress, Aesthethic Hallucination of Reality
Posted by maskofgojira at 11:44 PM