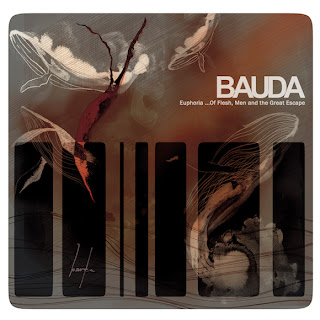 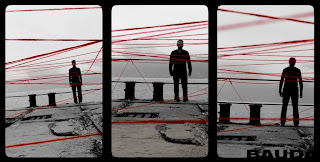 For many of you, Bauda will more than likely be a new name, but if you happen to have listened to the right album recently, the name might actually ring a bell. It's not their debut, 2009's Oniirica, that will likely stick out to you, but more the song they contributed to the Whom The Moon A Nightsong Sings compilation a few years ago. Maybe now the band's name will ring a bell?
I'm not actually sure how much acclaim the project, now band, had gotten thanks to the exposure from being a part of that compilation, but this new album definitely has a different approach from the work that preceded it. Stylistically, the band has grown, but the biggest shift from past material is the use of vocals, they're actually used. Stylistically, the band combine elements of post-rock, folk music, alternative rock/metal, and ambient music into a sound that is quite unique. While the last full-length kind of expressed these sounds intermingled together in an ever flowing album, this album tends to favor a more song-to-song approach where some ideas may be more present than others depending on the track at hand. Some tracks on here are very calm and mellow, not really reaching a breaking point until the last minutes of a track, like opener Ghosts of Phantalassa for example, but on the other side of that you have a track like Silhouettes which is one of the more "aggressive", and I use that work lightly, tracks on the album. It's very straightforward in comparison to other tracks, and it kind of reminded me of what it might sound like if the Deftones (or maybe it's more like Porcupine Tree) ever decided to try and write a pop-punk song. It's very up-beat and danceable, but still interesting, not at all one-dimensional like most pop-punk, if you could even call it that.
It has to be said, this is not a heavy album, while distorted guitars are given a fare-share of time in tracks, I'd really have to call into question what you consider metal if you said this was heavy. A lot of the record's structures come from post-rock, where the majority of a track will be kept at that mellow, dreamy, sometimes folk-ish pace until you reach a climax and distorted guitars will enter into the picture. Now not every song on the album is that way, obviously, based on what I said above, but about half of it is. Personally, while the distorted moments are nice and all, they certainly spice up the picture that is this album and add that extra color that's needed to keep a listener's attention (at least my attention), the softer passages were the ones that wound up being some of the best on here.
This, at least in my opinion, is an album of moods and an album of melodies. Like I mentioned above, each track does have its own kind of idea going for it, The Great Escape is more of a calm and straightforward folk rock tune while Acension, the track that directly follows it, is a very dynamic sort of progressive post-rocker, with really nice melody flowing through it while shifting textures throughout. I could also say that the former is more of a somber and very direct kind of track while the latter is, and I'm kind of hesitant to use this word but, inspirational, or uplifting.
In the end, it's an enjoyable record for anyone who happens to enjoy post-rock or more modern progressive rock leaning (Porcupine Tree worship bands I mean). The record has a few tracks that don't really do much for me, but the greater majority of tracks are all interesting and enjoyable. Definitely a must for fans of progressive music, even if this is a bit more of the mellow side (even with distortion).
Overall Score: 9
Highlights: Humanimals, Silhouettes, Acension
Posted by maskofgojira at 8:37 PM