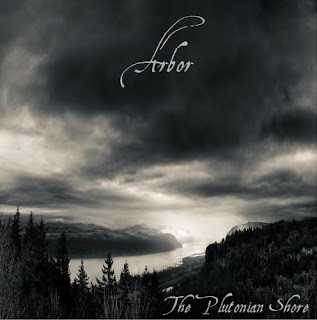 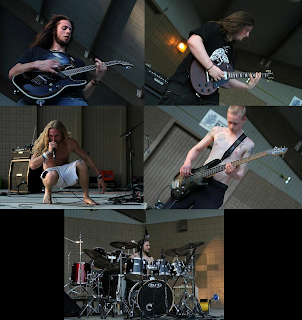 New bands abound, it's always great when a new band turns out to just grab you. I knew from this cover that this album was worth checking out, not knowing anything about the band at the time. It was pretty much a bonus when the band actually contacted me about covering it.
Based on the above and the fact that the band site groups like Opeth, Katatonia, Alcest, and Agalloch as influences, I'd assume that like me, you'd think that this would naturally be good. Interesting at the very least. Well, you'd be half-right. It's really surprising how divided this album is, it's pretty much split down the middle, at least for me. Let's talk about the band's sound first, because they really do have some nice ideas, and since it is a debut album, if there are more obvious references to their influences I'm not gonna hold it over their heads. The influences definitely come through, there's a bit of a Cascadia sort of vibe going on in a couple of tracks while some others are more direct and come off a bit more in the style of melo-death, and that isn't even a bad thing in this case. Instrumentally, the band is really pretty solid, the riffs are pretty decent and the softer passages are nice and beautiful. Despite the Alcest influence, which I guess I thought would have had a bigger presence on here, is pretty minimal, with the band favoring calm acoustic passages over lush clean ones with tons of layers. Tracks like Red Sun Rising or Fragments of A Day have great soft passages that work fantastically, though the mood of the latter track is ruined by the band deciding to crank up the volume in the track's last two minutes, if they stuck to a full acoustic or clean song, I think they could pull it off. There's also a nice use of dynamics in these songs, with the exception of that ill-judged closer, the rest of the album features songs that have ups and downs, with each track providing something just a little bit different than the last.
Now for my problems with the album. My biggest complaint winds up coming in the vocal department, and it's a problem big enough that it nearly crippled the album. The clean vocals on here are just bad, I'm sorry to say, but they are just not well done. I can kind of see what they were going for and in a way I can kind of see how some people could say that they have a sort of Jonas Renkse-like montonal quality to them, but they just come off as really emotionless and lifeless. Now, if the screams or growls were this way, I think that I could just say that the vocal department has a sort of direct blandness to it, which in some cases has its own charm and merit to it, but the more intense vocals actually sound convincing and passionate. Hell, even the whispered vocals, cliché as they might be, have are nice in comparison to the cleanly sung vocals. I realize that I may be coming off rather harsh, but tracks like Trees and the aforementioned Red Sun Rising were pretty much ruined for me by the clean vocals used on them. Having said all of that, the second half of the album really picks up the slack and really shows a better and more unique sense of songwriting than the first half did. While they aren't quite as up and down as songs from the first half, they are more engaging and have more of a personality, with Pillars really standing out as the best track on the album with a very well done Kveldssanger-esque chanting section being incorporated near the end.
In the end it's sort of a mixed bag for me, some tracks really are very good, while others are hindered by an extremely weak vocal performance. I know there will be some who think I'm being a bit overly critical of one part of this album, but it just did not sit well with me and hurt the album in almost every track it was used on. Aside from that, if you happen to enjoy Cascadian-ish melodic black metal, I'd say to at least give this album a shot, you might enjoy it quite a bit.
Overall Score: 7
Highlights: A Great Leap In The Dark, Only The Wind Calls Back, Pillars
Posted by maskofgojira at 3:48 PM