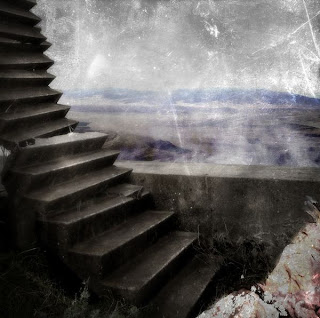 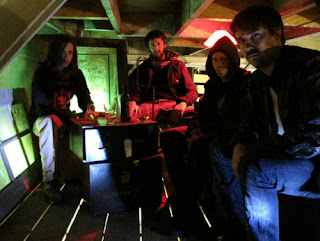 From the moment I saw this album cover I knew it was something I had to hear. Cover art aside, I was also really interested in the fact that this was a new band. Having never heard the band before (it would have been odd cause this is the debut full-length) I was going only off of what the genre tags told me, progressive doom metal.
The mere fact that this band chose to both open and close their album with sixteen minute long track speaks volumes about how highly they regard their songwriting abilities. I don't mean to make that sound negative, but it really takes confidence to put a track like that right up front, and it's the type of thing where the song has to be strong to make the listener want to listen further. This is even more questionable when the album in question comes from a new group, luckily for Wild Hunt though, they knew exactly what they were doing when they put this album together (structurally). Eidetic Parallax moves from strength to strength, playing up some great doom-based riffing while channeling traces of black metal and I'd say some stoner rock/metal as well. Sure, I'm pretty sure one could just as easily call this a post-black metal album, Wild Hunt do share some similarities with a group like Altar of Plagues, because I've read some comments that do that, but this isn't the sort of album that falls as easily into that stereotype and you'd really have to stretch it to really say this is a black metal album. It's more rooted in doom.
While it might not be a huge deal, the ambiance on here did grab me on more than one occasion. For me, that's probably the biggest link to the whole post-rock genre the band has on here, sure there are obvious builds and some closing sections with clean guitars, but the atmosphere is what conjures images of clouded beauty in my head. I'm sure there's just as much an appreciation towards ambient music in the band, interlude Unravel The Veil of Separation, Bask In The Serenity of Discord definitely shows some strength in that department as well, but to say there isn't a post-rock influence would be lying. In fact, I think that that may be one of the group's greatest strengths.
It seriously shocked me when I found out that the vocalist of this band was their drummer, Harland Burkhart, though I guess that explains the sparing use of vocals throughout. I have to give credit to where it's due though because when Burkhard does roar or sing, he does it well enough to grab my attention; and though the vocals aren't exactly the loudest in the mix, they still manage to pop out from time to time. It's all the more impressive when you hear how great a drummer he actually is though, his fills are interesting while always acting as the backbone to the band and keeps the song moving forward throughout its various sections. But perhaps I'm selling the other members short here for not bringing up the various forms that the guitars manage to help carve this record into. Like I said above, it's doom metal, but the black, stoner, psyche rock, and even post-rock shades cannot be ignored on here. Though it's not the longest track on here, the album centerpiece, Window to The Nether, manages to convey the most varied guitar styles, from tremolo picked sections to traditional guitar harmonies, good ol' stoner grooves, and much more. I kind of wish the bass was a little bit louder in the mix because when I can hear it, it really strengthens the grooves, if not providing its own, but that's a very minimal complaint due to the fact that I can actually hear the bass throughout (I just wish it was a little bit louder). Everyone does a great job, what else can I say.
I'm not sure how many other bands these guys have been in but there's definitely talent in here and it's amazing how well they were able to put these songs together for a debut. It's easily one of the most interesting doom-based albums I've heard all year. Definitely check this out, I'm not going to bother with demographics here because this has something that could appeal to everyone.
Overall Score: 9
Highlights: Eidetic Parallax, Window to The Nether
Posted by maskofgojira at 10:51 AM