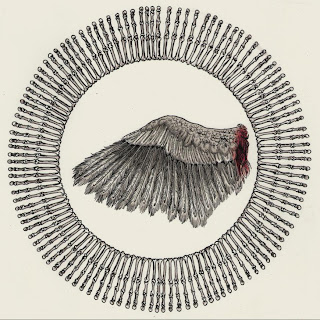 Despite my love of black metal, I very rarely listen to, whether by choice or otherwise, bands from South America. Even the classic bands aren't really all that appealing to me but this did grab me, conceptually, before I ever listened to it. I'm really late in covering this one (among others) but it's still relevant.
Coming into this EP, I kind of knew that it was on the rawer side of the production spectrum, and I was right, but that has little impact on the power of these songs. Despite being rough around the edges, in terms of structuring, some of the transitions are a bit rough, which is most apparent on opener I, but aside from that the band have a pretty solid range of ideas on here. While the base foundation is definitely black metal, and that's the majority of where the ideas come from, I heard a little bit of post-rock in some of the climaxes of these songs, I'd say tech or more progressive oriented bands as well because there are riffs on here that go way beyond your standard tremolo picking and are quite elaborate. Songs often start one way and shift into another idea rather quickly, II is a good example of where the band is essentially playing with a pretty standard black metal formula but breaks it up with very melodic, and I'd say uplifting, riffs that stand apart from not only other songs on the album but a lot of other groups as well. Certain parts remind me of Krallice while others bring out an almost Peste Noir (Thanks Lurker for that one) kind of vibe to them. More than a few riffs are memorable and, despite how abnormal some of the ideas are for a regular black metal band, stick with me for more than the duration of a song. I don't know how many members are in the band but I kind of wish the bass was a louder in the mix, if they even have a bass player that is.
For a debut from a band from a country (or continent) that I don't tend to enjoy a whole lot from, it's really impressive and interesting. I honestly wish I could hear more bands like this from South America. With a few improvements they could really go places (though even with this they're far above many newer bands). Definitely check it out if you enjoy some mixture of raw production and more progressive sounding black metal, it's really good.
Overall Score: 7.5
Highlights: III, VI
Posted by maskofgojira at 12:52 PM