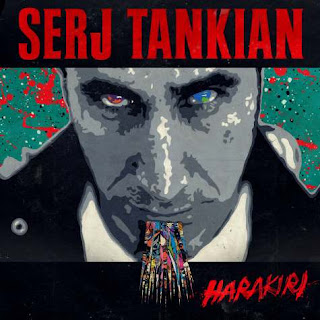 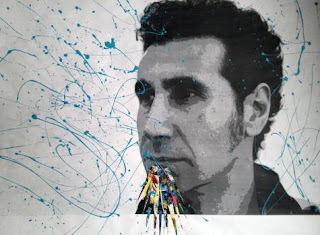 Yes, I am indeed a fan of Serj Tankian. Much more than any of his other companions in SoAD, I've always thought Serj had not only the most unique voice (vocally) in the band, but also musically. Though I wasn't a huge fan of his last full-length, the two songs I had heard released from this beforehand actually made me interested.
I have to say that I was a little shocked when I first heard Cornucopia and Figure It Out because based on what Serj had done with not only Elect The Dead and Imperfect Harmonies, sonically, I didn't really expect him to put out songs that were pretty direct and rock based. On his debut solo album he had some more standard sort of alt. rock songs but he mixed them in with some more experimental tracks and ballads, and on his last album he abandoned most of his rock leanings in favor of more of an experimental album that took influence from jazz, classical, and electronic music. Having since listened to this entire album, it's apparent that he hasn't totally forgone his experimental tendencies, but this is a much more up-beat rock record that is probably going to be a lot more accepted than his last release.
Personally, I think opener Cornucopia is probably my favorite track on this entire album. I just think that the sort of eccentric main guitar line that is used throughout the track is a little weird while the chorus is just huge and sounds very fun and I'd venture to say even sunny, sort of like something I could hear a sunshine pop group singing (the melody, not the lyrics). But it's not even like that's limited to that one track, numerous songs on here are very up-beat to the point that it might even freak out some people who aren't familiar with how serious the lyrical content is. It isn't hard to imagine some of these songs winding up on mainstream radio (no doubt they have already been on already) but the dark subject matter and the up-tempo music accompanying it could prove to be more than a little jarring for a new listener. Not to discredit tracks like the very direct and punk-esque Figure It Out or more melodic stylings of Butterfly, but they just don't live up to the monolith that is the opening track. But then you have the more experimental tracks that really stand out. Unlike previous albums, the weirder aspects of this album are pushed a little farther back in order to try and make the songs a bit more accessible and immediate, nearly experimental track still manages to make room for a more rock-based chorus, which is a little disappointing considering how interesting songs like Ching Chime and Deafening Silence are. The latter features a strange mixture of beautiful acoustic passages with trance electronics while the former is primarily electronic, but is eccentric enough to recall some of Serj's early work in SoAD. To be honest, there's a big section of this record that is almost out of place, because there's a clump of four experimental tracks in a row that stand out quite a bit after the initial rock songs open the album up. It's not bad, but I do think that the track listing could have been worked on a bit more to mix them up (which I think would have worked for the better, but that's just me). I don't think that saying Serj sounds great on here will surprise anyone, but I'll throw it in just in case you were at all worried. He sounds great.
While I'm personally not all that into some of the trance synths Serj chose to use on here, I don't think that they wound up hindering the album too much. While it isn't quite as catchy as I would have liked it to have been (based on the first two tracks), but I think that if you happen to enjoy Serj or alt. rock, it's a solid record nevertheless. I think that whether you happen to like the more straight-up rock or the more experimental Serj, you'll find something to like on here.
Overall Score: 7.5
Highlights: Cornucopia, Harakiri, Occupied Tears
Posted by maskofgojira at 1:20 PM