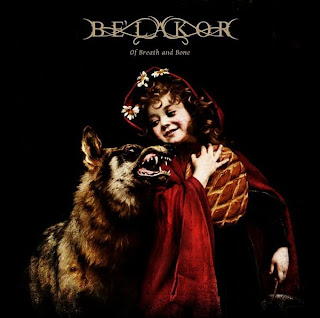 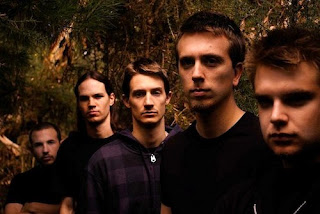 Unlike a lot of melodic death metal bands, new ones I mean, Be'lakor has actually impressed me. I can't say that I ever was up-to-date with the band's recording or when this was being released, but when it was released, I was obviously aware of it. Being one of the few melo-death bands, moderns ones, that I can actually take seriously I was obviously going to cover it.
Be'lakor is a band that has a lot going for it. Ever since the my Junior year of high-school, I can't say that I listen to too much melo-death any more, I have a handful of bands that I like and there are always some newer ones that pop up now and then that either make the genre interesting again or at least do a good interpretation of it. Be'lakor is closer to the former in that regard, because their last two albums have definitely carved out a sound that isn't as narrow as many "purists" might have you believe. I've seen the prog tag attached to the band and listened to their enough to say that they definitely have a good mindset when it comes to writing their songs. They're skilled at writing interesting structures, melancholic atmospheres, and catchy melodies which is enough to get my attention at least. In my opinion, they're one of the few "melodic death metal" bands who can get away with longer songs because they don't really feel forced or overlong.
Having said all of that, I can't say that this album blew me away as much as its predecessor, 2009's Stone's Reach, did. That's not to say that the album is bad or anything, but it just didn't reach out and grab me and hold my attention the way that album did. I also feel like the melodies used on here are too similar to each other and that made me question if what I was listening to was a concept album (if it is, please let me know) because it felt like I was hearing repeated melodies or melodies that were very similar to each other throughout multiple songs. But even then, I still think that the melodies are very tastefully done and executed, they're not overly technical or flashy, and in a similar way to what a band like Insomnium has been doing, they manage to convey melancholy, sorrow, sadness through melody and atmosphere rather than through layers of keyboards or vocals. Though there's plenty of piano on the bottom half of the album, I never really viewed that as too much of a dealbreaker because of how sparsely it's used, it never overwhelms the song and is never the source of melody.
I will say that the problem of similar melodies does fade away on the second half of the album though, which contains some of the most progressive songs the band has recorded to date. The last three tracks are all great and definitely close the record in a great way. In Parting is the most straightforward of the three, not really breaking the style too much from the first half of the record, but definitely improving upon it. The Dream and The Waking is very good, bringing in quite a bit more mood through an acoustic break while delivering great harmonized riffs (boy do I love it when a band does that well). Closer By Moon and Star stands as the most "progressive" riff oriented track on the album despite being one of the most aggressive on the album. Though I did question how much I enjoyed this record nearly every time I was listening to the first half, the second half always perked my ears right up and made me remember why I like this band.
I think it's a pretty damn good melodic death metal record, it has a lot of what I like about the genre while not really sounding like a simple rehashing of its glory days. I know some people won't be able to get past the growling only vocals or longer songs, but if those things don't happen to bother you, you'll more than likely enjoy this. It's well worth your time if you happen to enjoy good melodic metal that is more interesting than poppy.
Overall Score: 8
Highlights: Remnants, The Dream and The Waking, By Moon and Star
Posted by maskofgojira at 12:04 AM