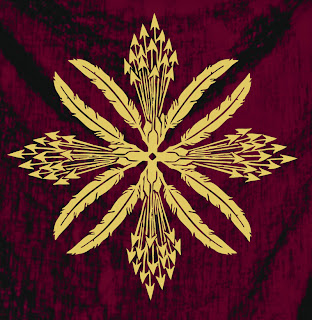 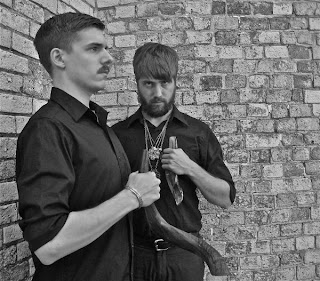 Neofolk is a genre of music that, in my opinion, has become rather stagnant in recent years. Most of the best, most unique, and memorable bands came around during the genre's inception and very few bands manage to do much with it as of recently. Pesanta Urfolk has really been praising this album as one of the few to do that.
In my case, when I think of neo-folk, I think of groups like Current 93, Sol Invictus, Death In June, The Moon Lay Hidden Beneath A Cloud, just to name a few. They're all fairly well known and respected among underground music fans. But what does that really have to do with this debut full-length from Wreathes? Well seeing as both Troy Schafer and Nathaniel Ritter have quite a bit of experience in their own right when it comes to making folk music, if anyone's bound to make an album to push the boundaries of neo-folk, these guys have more of a shot than most others. With projects like Burial Hex, Kinit Her, and Rain Drinkers, among others, under their belt, I think that coming into a record made by these men, and knowing that it has some sort of folk based sound, is a sure sign that you're going to get some quality material.
So, why all the hype? What's so special about this project to make people claim that it's the most exciting thing to be produced within the neo-folk genre in years? Well, that's exactly what I asked myself, luckily it didn't take long to get an answer. If you've listened to any of the bands I mentioned above, or other well known groups and projects, you should have a pretty good idea of what these guys are going for, but what makes them stand out among the other new groups doing neo-folk is their songwriting chops. Like I just said above, both Schafer and Ritter have experience in folk music, making use of everything from traditional songwriting to free-form and improvisational styles, so they definitely have a grasp on what it takes to make a good folk based album. But perhaps I'm selling this album a bit too short, because it is obviously more than just another neo-folk album. There are traces of post-rock, ambient music, and perhaps more obviously martial industrial in various forms all over this record. They're all kind of blended together into the boiling melting pot that is this record but to call it any one of those specifically (obviously I'm using neo-folk as a sort of overarching term to describe this album) is selling this record short because it is so much more.
I'm not going to lie, some of the more free-form and improvisational folk releases these guys have been a part of and released, that I've heard, I haven't been that into. When it comes to folk music, I do happen to enjoy a good majority of it, but I happen to enjoy good songwriting and good songwriters. Setting a mood and atmosphere is good, but in my mind, it's important to balance the two and not really let one completely overpower the other, which has been the case on a few prior releases. On here however, the balance is maintained throughout each of the six tracks, giving the more traditional song structures more breathing room and allowing them to open up in ways far more impressive than I ever expected. Songs like Odes or Speech of The Tides begin as more straight-up neo-folk songs but wind up becoming far more expansive and immersive before they close out. I don't mean to discount the other songs on here, but personally, those were two songs that really broke the mold of what I was expecting from this record. I don't think I can call this record ritualistic, it doesn't quite have that haze or mysterious quality about it that makes a record seem ritualistic to me (to me mind you) but if I had to call it anything, I'd definitely have to say that it's authentic. None of these tracks feel like these two guys just went through the motions to record a bunch of songs, you can just feel the passion and heart that went into this album.
Despite how much I enjoy listening to this record, I do have a bit of trouble saying that this is the most exciting thing to emerge from the whole neo-folk scene (in a while). It's more than certainly above average in pretty much every category I can think of off the top of my head, but there's just one thing that I just can't place that's missing from it. Nevertheless, it's more than certainly worth checking out and worth whatever you pay for it.
Overall Score: 9
Highlights: The Reigns, Speech of The Tides
Posted by maskofgojira at 7:46 PM