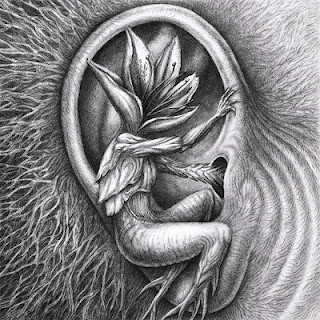 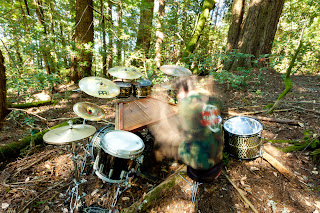 Last year Botanist released one of the most interesting and polarizing releases of 2010. The double-album of hammered dulcimer, drums, and vocals performed black metal was easily one of the most original concepts for a band in a long while but it also had the songwriting to back up the idea. Though some found it hokey and didn't like the idea, I was very much into it and was definitely looking forward to this album.
Even though the debut from Botanist was a sort of musical revelation in the black metal genre, I'm pretty sure that this second album would move into a more doom oriented direction. With both longer tracks and more of a focus on building atmospheres it was obvious that it would take more than luck to create another great album. In all honesty, the debut, while enjoyable, was a little spotty due to some tracks being so short they barely made any impact, and it did harm my overall enjoyment of the album. In the case for this album, with every track being stretched out over the six minute mark, you really have to come into this expecting an experience and be prepared to either go with the flow of the album or just fight against the entire idea of the project. Quoth Azalea, The Demon (Rhododendoom II) is an absolutely beautiful opening track that manages to recall the majesty of a band like My Dying Bride while never in the slightest sounding anywhere close to their sound. If you can't get past that opener, I think that you should stop listening there, it doesn't get any easier after that track.
What follows is a far more varied album than I would have expected from the project, which I really have to give a lot of credit to the mainman Botanist. While most of the album is firmly rooted in doom, there is still a clear sense of black metal in there, coming through at choice spots of intensity. Which brings me to my next point, which is while the music itself, on any of the albums the project has released thus far, may be metal based, it is rather hard to say that the music is "intense" or "brutal" or even "aggressive" for that matter. It's been a project that can crank out well crafted melodies, slow or fast, but one can really only feel any sort of intensity coming through in the percussion, which I didn't get all that much from the debut(s) but actually got more often on here, an album which is far more tranquil and somber than its predecessor(s) were. As can be assumed as well, the music on here is far more spacious as well, with a lot of moments falling into silence, or near silence, which adds a great sense of dynamics to the record, hear Ganoderma Lucidum. As a whole, the entire record proves to be not only an improvement on every level from the debut(s) but also a step into a new direction.
Then we have the second disc titled Allies, which features a nice little assortment of artists taking the drum tracks from the original album and do their own interpretation over them. Compared to the standard album, this compilation (I guess you could call it) is more of a mixed bag. Stylistically, it's at least kept in a similar ballpark as the album, for the most part, with the majority of the bands on here either delivering some variation on doom metal or you have the other side who take it into almost complete ambient territory. The one that deviates from that standard is Ophidian Forest who take their track into more of an atmospheric black metal direction, and do it quite well I might add. Of all the collaborators though, I think that Arborist wind up delivering the best track. It's sort of a mix between really raw doom metal, country music, and I'd say just a hint of shoegaze as well (but that might just be me). While I didn't dislike any of the tracks, there were some that I did find to be a bit more dull than others.
Because this is essentially two different albums I feel like I kind of have to give each album a score. Personally, and this shouldn't come as any surprise, I do think the "real" album is superior to the reinterpretations the other artists give (most of which I've never even heard of) but both are well done. Both albums are well worth looking into, delivering what is probably the strongest doom metal album I've heard this year.
Overall Score: 9/7.5
Highlights: III: Doom In Bloom: Quoth Azalea, The Demon (Rhododendoom II), Deathcap, Ocimum Sanctum
Allies: Ophidian Forest - Cordyceps, Arborist - Total Entarchy, Lotus Thief - Nymphaea Carulea
Posted by maskofgojira at 7:41 PM