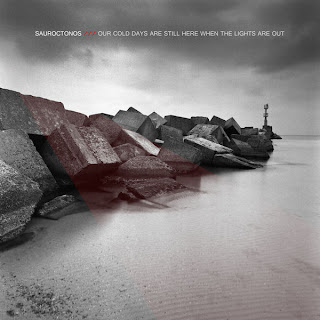 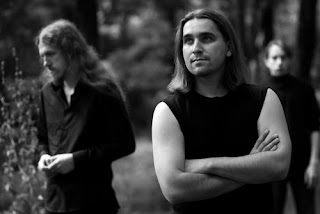 I first heard of this band last year when I was on a post-black metal/blackgaze forum and the band were trying to raise some hype for this record. They were unsigned at the time and I think they were trying to get signed at the time, but their cover stuck with me long after I had forgotten their name. I didn't even remember them when I found this album, but the cover made me think back and attempt to remember (then I saw the band photo and it hit me).
Back when I was posting and commenting on a post-black metal/blackgaze forum (I wish I remembered the name) I remember these guys posting up some links and photos for this album, which I believe wasn't completed as of yet, but it really struck me. Like I said above, I kind of forgot about them until I saw their band photo when I was getting this review together, but even when I figured out who these guys were it was pretty shocking. The sound on here is different than what I remember it being (it was a while ago so I might not be remembering correctly here) but is actually a lot better. I don't think it's a stretch of the imagination that these guys play a style which is rooted in the whole blackgaze and post-rock influenced black metal sound, but what made me take notice was not only that these guys were very capable musicians but they put together some rather inspiring songs.
While the album as a whole is very well constructed, I do have reservations about the use of electronics on here. I wouldn't ever say that they're bad, especially since they don't really intrude on a song very much, but I question both their relevance or why the band didn't make more use of them. For the purpose they're used for on here, I think it definitely worked out for the better as they enhance the section of the song they happen to be used in as well as change the vibe of a song, in the case of closer Farewell, from a rather melancholic piece into something that's a bit more uplifting and, I'd say, danceable. It works, but I am curious how the band will go about using them, if at all, in their future recordings.
But on a more positive note, the songs on here are all pretty decent in their lengths, but unlike a lot of groups within the whole blackgaze and modern post-black metal scenes these guys have far more interesting song structures and ideas. I'm not going to say this is going to hit you as super original, but there are clear nods to the likes of Opeth, Katatonia, among other metal groups but also some pretty sizeable post-punk as well. The sounds of this recording also doesn't have too much in common with the tons of bands taking influence from shoegaze either. It's a far more stripped down recording and sounds more like a couple of guys just playing through these songs rather than layers upon layers of extra instrumentation to bulk up a track. That more naturalistic sounding production also benefits the band in allowing the bass lines to really come out from underneath the more mid-paced riffing of the guitars. I'd also like to make a case for how diverse this record is, while still remaining consistent, you have more dynamic tracks that move from blistering black metal to somber acoustic passages, as displayed on opener Lights Out, then there's more straightforward aggressive tracks, My Name Escapes Me, or the third "style" which is more in line with the whole post-metal mentality, which I guess is the closest to the whole post-rock influenced black metal style, which happens in last two-thirds of the album. I just really think these guys have crafted something great.
It's a very impressive debut album from a band that shows a lot of promise. I look forward to hearing more great material from this band in the future. Definitely check these guys out if you're into more naturalistic sounding post-black metal while still having dynamics, which I know that sounds pretty convoluted but is true. This is well worth hearing this year.
Overall Score: 9
Highlights: Lights Out, Empty Grave Empty Faces
Posted by maskofgojira at 11:12 PM