Part 5 of the split series, you know the drill by now. Reviewed from 1-8. 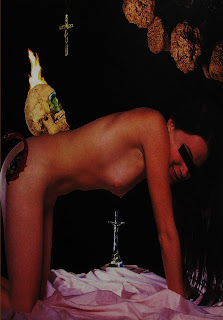 First one up to bat is this odd little double-bill of retro occult rock group Vestal Claret and old-school black metal band Ungod. Four songs for each, starting with Vestal Claret, we get a pretty decent mix of psyche rock and folk with some more traditional heavy metal elements thrown in for good measure. Opener The Demon and The Deceiver is a really solid psychedelic folk song that really got my hopes up for what follows it because it was an interesting piece that showed a band really delivering a good song, but unfortunately, the two songs that followed it were unremarkable to me. They're not bad, but nothing about them really stood out to me, it was just average. Piece of Meat definitely returns the band to a higher level of songwriting, but still isn't quite up the same level as the opener. Then there's Ungod who throw away any sense of 60's nostalgia that was given by Vestal Claret and go straight for the jugular. Personally, I enjoyed this half more so because it didn't sound quite as unfocused and the songwriting was on point. You have pretty straightforward bursts that don't waste any time beating around the bush. Closer Silence In The Golden Halls of Endless Hope (2012 Version) does mix it up a little bit, being a bit more of a bruiser than a killer, if you catch my drift. Still, as a whole it's worth checking out.
Overall Score: 6.5
Highlights: The Demon and The Deceiver, Dues Est Homo, Silence In The Golden Halls of Endless Hope (2012 Version) 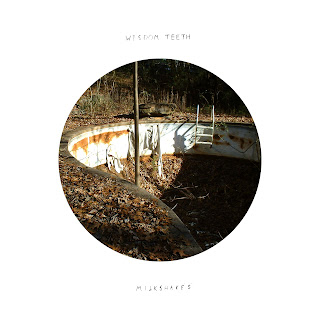 I guess I should start this one off by saying that I am not a fan of pop-punk music and that emo music is something that I'm pretty picky with. I was just as surprised as anyone when I was asked to review this, but I have to be perfectly honest with what I'm going to say. First off we have Wisdom Teeth. The name they picked is about the only thing I can say positive about the band. The three songs they bring to the table are just bad; and I know I'm being blunt but whatever. Their vocalist is pretty much what I think of when I think of emo vocalists, tuneless and winey. Along with that, the instrumentals backing him aren't even all that impressive, sure there's a decent guitar line in Swans Don't Feel The Hurt, but the rest is almost ignorable underneath his vocals. They are also where the pop-punk tag comes from as well. Then there's Milkshakes, who, alone, are actually quite good, but by comparison are just amazing. While they're not extraordinary, the vocals sound more masculine, which I appreciate, while actually feeling like he's emoting and not just wining. The band backing him is also just as jumpy(?), when he starts yelling, the band get more intense. Their songs are also shorter, not one is over two and a half minutes, giving it a more immediate punch. So, in conclusion, if you like emo bands, listen to Milkshakes, avoid Wisdom Teeth.
Overall Score: 5
Highlights: Sally Tumbles, Joey Fitness 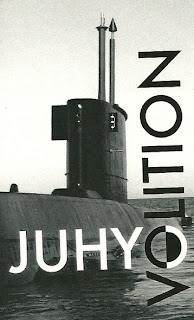 This was an odd one because the copy that I got was 3" CD, which was weird into and of itself, but the music itself was pretty different from what I expected as well. Both projects are pretty different sonically from each other. Each project delivers a single track each, both just topping ten minutes. Volition is probably the easier to wrap your head around, being more or less of a death/doom sort of band. They don't really deviate too much from the ideas heard on early Unholy, Ceremonium, or Winter, though I don't know if that could be considered a bad thing in this case. While the riffs aren't really anything special, at least to me, I thought the mood was really cold and mechanical, giving the track an almost urban winter (no pun intended) vibe. Juhyo on the other hand delivers a similar sort of track in terms of tone and atmosphere, but is a noise track instead of a metal one. The track maintains that urban vibe while transitioning from an intense blast of feedback into a reverberating drone with industrial sounds moving in and out. It's actually quite interesting. Both tracks are definitely enjoyable.
Overall Score: 7
Highlights: Savage New
Posted by maskofgojira at 10:51 AM