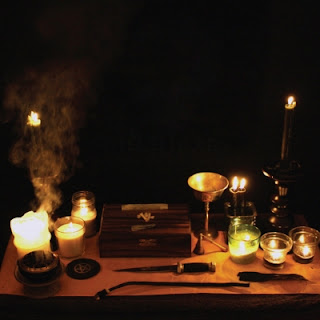 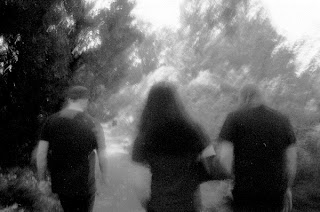 By now, Sutekh Hexen has made quite a name for themselves so saying you've never heard of them before is getting to be less of an excuse for not having heard them. By now, their discography is getting more and more lengthy and the same could be said of their sound. With Larvae being breaking open their sound earlier this year, I was quite curious what they would do on here.
Returning to the two track only strategy of their previous work, this album shows the trio of Sutekh Hexen expanding their sound in a different form than Larvae did. When I first saw this album, I was sort of expecting something more intense, more or less in the vein of the band's earlier material, and while I. does bring in some similar ideas from earlier material, this is a very different beast. There are certainly intensely distorted screams and layers of distortion and noise on here, traits that have become intensely important in the band's sound, but instead of blazingly fast black metal riffs, we see the band embracing more of a ritualistic kind of doom and drone style for this release. I. is certainly more "metallic" with long, drawn-out guitar chords ringing out into the abyss, but it's by no means as intensely brutal or exhausting as their other work, and while we do see the band speed thing up near the middle of the track, it just is not the same. There's a melancholic ambiance hanging over the whole thing. It actually reminded me a bit of the Shadows single they released a little while back which had the single track that was a lot more quiet and ambient for the most part. The second track, obviously titled II., is even more in the ambient vein, abandoning most of the traits we've come to expect from the band. In exchange for the aggression, the brutality, the metal, and a good portion of even the noise, we get a very chilling, minimalistic sort of neo-folk-esque dark ambient track. Yes, we still have noise, that's still there for all of you who were freaking out. There are freak-out moments where we get shots of distortion, if only to draw those back in who might have wavered while listening to this, they act as a sort of grounding point, at least to me, which keeps the band's sound tethered to a single point. While the overall sound on this track is very different in comparison to most of what they've done, that distortion and noise keeps their sound controlled, so it doesn't become so overwhelmingly different, you still know who you're listening to. Personally, while I respect the band for exploring this kind of territory, I can't in all good conscience say that it's my favorite. It's well done, no doubt, but maybe it just needs to sit with me longer to have a greater impact on me.
As with previous Sutekh Hexen material, it's obviously very high quality stuff and well worth whatever you pay for it (especially since it comes in so many formats). As with Larvae, this might throw some people off, but if were one of the many who actually really enjoyed that album, you might enjoy this one just as well. Definitely pick up your copy while you still can.
Overall Score: 8.5
Highlights: II.
Posted by maskofgojira at 11:23 AM