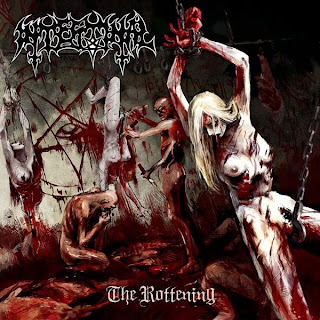 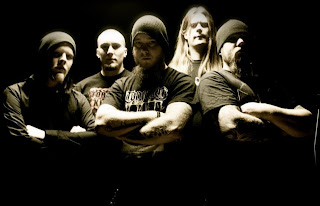 I've said multiple times in the past that I'm rather picky when it comes to the whole brutal death metal subgenre(or maybe I just don't have taste for it) and it remains true. Having never heard of Intestinal before and seeing their song titles, that's the style I imagined them playing. I still gave it a chance though because the band was nice enough to send it to me though.
Now, when I actually looked up the band, they weren't really tagged as a "brutal" band, and since it just said death metal, I kind of just took it for what it meant. Having listened to this, yes, it's not brutal in the sense of overly simplistic slam or other stuff like that, which is a good thing. While influences from tons of classic death metal groups can still be heard on here, the one band that this album really reminded me of was early Blood Red Throne (and I love BRT) and at times a bit of more recent Severe Torture. Modern death metal is sort of a hit-and-miss with me, I used to totally hate it, but when I listen to death metal, I like there to be grit and filth on it. Production wise, clean is fine, but there are albums which are far too clean (and I may like them in spite of it if the songwriting is good) but a death metal band has to sound like a band for me to really get into it. While I can't say the sound on here is my personal favorite (on headphones it just sounded weird for some reason) I like that the guitars actually sound distorted and the drums sound real. I could have used more bass, but for what this is, it's fine.
I can't say a lot of what's on here is surprising (it is death metal after all), but it is well done. It's pretty standard death metal stuff, and I don't mean that to be a negative thing, but for some reason I had a hard time penetrating this record. There are some really solid riffs, I love the vocalist's growling style (except for the pig squeal on Eating Your Inner Organs), and I think that the songs are compact enough to grab a listener right away, but I just couldn't seem to get into it. The faster parts just sort of flew by, but the more groovy, I don't know if you could really call them slow, but the more mid-paced parts where the band settled into a groove really worked well with the production style they have on here. Tracks like Vessel For The Dead or Undead Unleashed which seem to have more emphasis on either more drawn out riffs or groove, hit harder and wound up being more ear catching. I'm not saying the faster tracks are bad though, honestly, I still rather listen to this than a lot of other very stereotypical death metal, but I think it's just a case where one aspect of the band's sound happens to be more appealing to me, than another. I can't really fault a band for that now can I.
Overall, probably the best thing I can say about this album is that it's fun. It's not something that you have to think about too much, it's just aggressive and high-energy stuff that managed to put at least me in a good mood after listening to it. Definitely check it out if you're a death metal fan, it's good stuff.
Overall Score: 7.5
Highlights: Vessel For The Dead, Undead Unleashed, Slaughter
Posted by maskofgojira at 2:52 PM