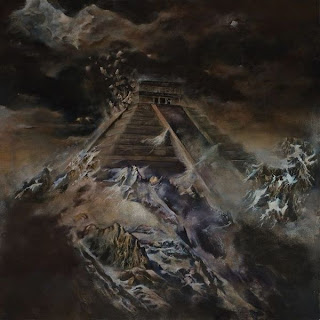 Back in 2008 or 2009 I went through a phase where I listened and looked into a lot of depressive black metal and funeral doom. Looking back, I couldn't tell you why, but I have since been a bit more picky about what I listen to from those genres. When I was really invested in the genre though, Elysian Blaze was a project that definitely stood out on both sides of the genres.
When I first got into the project I think this album was either just being announced or something like that. I couldn't tell you how many times I checked the Myspace page of Elysian Blaze hoping for some sort of update as to when this was going to be released. The album cover was released at that time, and I'm pretty sure the song titles were as well, but there were very sparse updates until I just sort of gave up and thought that the project had either been put on ice or had dissolved all together. Now, here it is, something like two or three years after I had thought that Mutatiis might have just ended the project and I see this album pop up. Was I shocked? Most definitely and no matter the quality of it, I knew it was an album I had to hear.
I guess the first and most definable feature many will notice about this album is the fact that it is a double-album that contains three tracks that top twenty minutes each. I was certainly shocked when I saw those track lengths, and probably just as surprised, if not more so, when I actually listened to them and found out that they were actually good. Don't misunderstand my intention, I did not come into this thinking it was going to be bad, not by a long shot, but in genres like funeral doom, like depressive black metal, like ambient black metal, tracks like that are often overrated, sometimes overhyped, but don't really ever accomplish too much. While songs this long often have a very narrow range of appeal, even in this style of music for that matter, these songs are quite interesting and have some really interesting ideas. I'll admit that I haven't listened to this project a quite a while, but what I remember hearing was a lot slower and more in line with funeral doom, this album is much more of a black metal album. Very ambient black metal mind you, but black metal nonetheless. Having gone back and listened to some of the project's earlier releases, I don't know what I was remembering because those albums certainly had quite a big black metal sound as well, but this album is far more bleak, I guess would be the most fitting word.
The range of ideas present on here is quite shocking if you've come to expect little from any of the genres I mentioned above. I really have to give Mutatiis a lot of credit for pooling these influences together in a way that is surprisingly original; and while mixing funeral doom, depressive and atmospheric black metal, ambient (or dark ambient), noise, and I guess classical music together has been done here and there, I can't say I've heard another album where they've been blended to a similar degree with as high results as this album. I really have to say that the closers for both albums are really well done. The title-track is a lengthy piano piece that works rather well for closing the first disc while Void Alchemy closes the entire album with an eleven minute ambient/noise piece. Unlike Fear Factory's recent use of this technique on their most recent album, this works far better. After the blistering assault the rest of the album has put you through, closing the entire thing with an ambient piece doesn't sound so bad. But I have to say that the metal tracks are the standouts on here, as if that should really come as a surprise to anyone. The first disc's metal tracks are a bit more visceral, despite their lengths, while the two on the second disc are a lot more imaginative. There are more detours and variety within these two tracks. While Pyramid of The Cold Son is quite an interesting track with a lot of cool atmospheric and ambient stuff popping up throughout, I think that the clear highlight of this entire album is, once again I'm sure it's no surprise, the thirty-six minute Blood of Ancients, Blood of Hatred. It's an absolutely haunting piece of music that, personally, I could just get lost inside.
I know that the length and style(s) of this album might put some people off, but it is truly a great record and it far surpassed any of my expectations. Hopefully it doesn't turn out to be an overlooked album this year, because this is the sort of release that could easily fall into the forgotten realms (do not let that happen!). It's a great album and one that I recommend not missing out on this year. (On a sidenote, if you decide to buy a copy, definitely go for the vinyl. I got mine a couple of days ago and it looks just fantastic).
Overall Score: 9
Highlights: Sigils That Beckon Death, Pyramid of The Cold Son, Blood of Ancients, Blood of Hatred
Posted by maskofgojira at 4:22 PM