Time for some rather new death metal records. Both of these are taken from the whole "cavecore" or Incantation-worship breed of death metal, just so you know. Hopefully you can find something worth checking out in here. 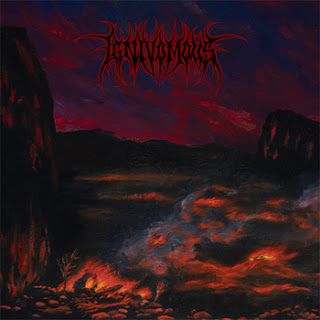 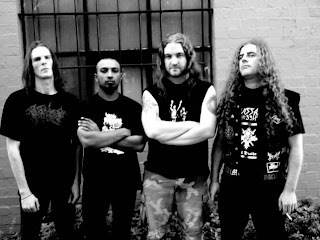 Based on the fact that Execration's Odes of The Occult record turned out to be my favorite death metal album of last year, I wanted to be on the lookout for some cool new death metal bands. That's where I found Ignivomous. I had remembered hearing about how great their debut was and kind of kept them in the back of my mind until finding this record.
I honestly haven't heard all of Ignivomous's 2009 full-length Death Transmutation but what I have heard is quite impressive death metal with an absolutely massive sounding guitar tone. Listening to this album, sonically, it really hasn't changed too much. This is intense, very Incantation-esque, death metal that sounds just sounds massive, though I wouldn't really say that there's ever too much emphasis on atmosphere on here, with apparently more focus being given to the riffs. There's a nice blend of both death and black metal on here, which, riff wise, brings out some nice change ups from time to time. Having said that, for all the high hopes I came into this record with, I just could not get into it. A lot of what's on here, not all of it mind you, but a lot of it is very high energy and intense, rarely providing any calm down. I know what you're thinking, "It's death metal, it's not supposed to calm down," and I understand that, but I could have used some more variety on here. Give me a track that's done at a doom's pace, because these guys do know how to do that, see Monumental Cosmic Transgression for proof, but these tracks just wind up blending together into a very unmemorable and rather unsatisfying pool of sludge. A song like A Rotting Faith Condemned is a great showcase for everything that the band can do when they actually make use of dynamics within a song. The tracks on here are also a bit too long for their own good. Most are somewhere within the five minute range, with a couple going over, but it was the shortest actual song, Pyroclastic Downfall, that wound up actually standing out on here the most. It's short and quick and can get away with being completely brutal for only a couple of minutes and not much else, I can't really say that about the rest of the album. It can be fine in the beginning, but after a while it just started to feel like a chore.
There's just way too little diversity for me to find this to be a great record, it just blends together far too often for me. For all I know, that's probably appealing to some and will more than likely make a few people check this record out, and I honestly wish that they find something in here they like, but I just couldn't get into it. Really, I hope someone can find something good about this record, but I just can't say I enjoyed.
Overall Score: 6
Highlights: Seventh Seal Gnosis, Pyroclastic Downfall, A Rotting Faith Condemned 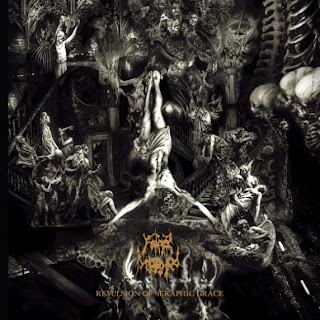 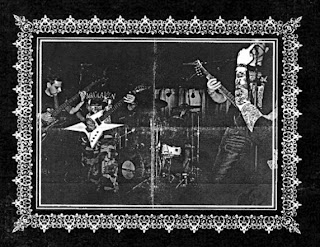 Since the many projects of a guy like Elektrokutioner have been getting hype within the last few years, I was eventually bound to check them out. I actually dug that last Encoffination record that was just him and Ghoat (who is a member of this band), which led me to checking out Father Befouled late last year. Knowing what to expect from these projects I was curious how this one would fit or do something a little different.
I guess thinking that this would be anything different might be me thinking too much of this sort of band, cause, despite any quality found within, stylistically, I have yet to hear a record from this sub-culture of guys that makes any big detours. Whether it happens to be straight-ahead death metal or death/doom, or even some more grind songs for some of their projects, they do it raw, they do it dirty, and they do it in an old-school way, with little to no changes. Having said that, quality will differ, I really like Encoffination, though I find Decrepitaph to be a bit dull, Father Befouled is somewhere in between. I don't find this band to be nearly as interesting Encoffination, but I still like the down and dirty, somewhat blackened take on death/doom that these guys do. They make the riffs sound really weird and messy (not sloppy mind you) and it just makes the whole thing sound off, which is actually really cool. Devourment of Piety is downright disgusting sounding, riff wise, and it makes me wonder how in the world they're making these riffs sound that way and have such bowel churning appeal (I don't know if others would consider that appealing, but I do). Now, as one might expect, the doom parts are the ones that happen to appeal to me more, but I actually enjoyed the more straight death metal songs on here as well, it's a good blend throughout. This album is also pretty short so it kind of makes it hard to get bored with it as well.
It's not far from what I expected coming into this, but it's still really solid death/doom with a nice blackened edge to it. I can't say that it'll blow anyone away or not, but sometimes you just need a good punch to the gut to remind yourself why this sort of stuff is actually worth listening to again. Not game changing, but if you happen to dig the style I'd definitely recommend it to you.
Overall Score: 8
Highlights: Devourment of Piety, Obscurance of Universality, Triumvirate of Liturgical Desecration
Posted by maskofgojira at 12:29 AM