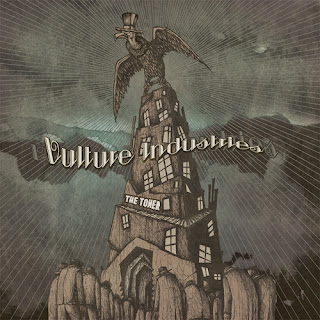 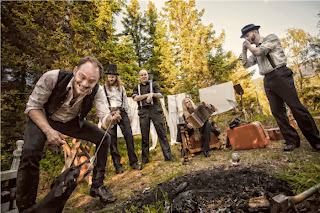 Ever since I first heard the opening track from their debut full-length, The Dystopia Journals, I've been a huge fan of Vulture Industries. While early on they drew comparisons to the mighty Arcturus, the two releases after that full-length (including this one) have broadened horizons and the band has gone and crafted a sound all their own. From the second I received this album I've been diving in and exploring it.

From the moment I had heard the leadoff track, which was the opening title-track, I knew that this album would be a great successor to 2010's utterly fantastic The Malefactor's Bloody Register. It was catchy and even more progressive in its structure and riffing style than the band had been in the past yet still retained that very dramatic tone that vocalist Bjørnar Nilsen brings to the table. I was unsure about how the rest of the album would sound after this track because it wasn't overly aggressive but set a tone that I really dug, so when I finally made my way through the album I guess what shocked me the most was the reduction in how "metallic" the band was. On the previous full-length there was a noticeable downshift in the use of harsher vocal styles; and on this album there's almost none at all. Stylistically, this album is also a bit less eccentric in it's presentation, and to me seemed closer to progressive rock than it's heavier counterpart. That's not to say it's a softer album, though there are definitely some quieter moments on here, but you can definitely expect a more dynamic album than either of the band's previous two full-lengths.

Personally speaking, I believe the addition of softer sections, like the acoustic closer Lost Among Liars, definitely made this a more complete sounding album. Yes, this is a concept record, and I assume that that did influence the band's decision to add some more mellow and quieter sections into their sound, but I think that even if it wasn't that the band's choice to reduce the more extreme moments of their sound and make a more balanced recording definitely did them more good than bad. Reducing that more metallic edge for this record and giving it a bit more of a muted tone, in terms of production, definitely makes it come across as more accessible but more quirky. In the vein of more progressive acts from the late 60s and early 70s more so than the shred-fests that the genre has evolved into in most cases (not that this band ever indulged themselves in that way in the past). There are many instances of a band releasing a concept album and the result appears to be that the band's sound was compromised in order to work the concept into their sound. If anything, I feel as though Vulture Industries has not only pushed themselves on here but the concept never overtook the music itself.

The sounds on here are accessible to both newcomers to the band but also fans who have been with them since the beginning. A track like Blood On The The Trail and to an extent the title-track as well are good starting points because they are two of the tracks that are more similar to the band's past work. But then there's the more mellow tone of the aforementioned closer or The Dead Won't Mind which, as I said, does provide a greater sense of dynamics to this record. But perhaps the most interesting point for myself was on tracks like The Hound or The Pulse of Bliss, which both rank among the best songs I've heard from the band and the latter being one of the best songs I've heard all year. While the former embraces itself in that progressive style which I keep bringing up, the latter is slightly more eccentric and features of some of the more dissonant moments on this album.

I don't think I'm exaggerating when I say that this is one of the year's best releases and it would be foolish of you (whoever you are reading this) to pass up the opportunity to listen to this great piece of work. Yes, I am a fanboy who will listen to anything this band does and more than likely will enjoy it but having been witness to each evolution in their sound thus far, I don't think it's a stretch to say this is their best work to date. They continue to impress and I know this is the place where I specifically call out who might enjoy this record but all I can really say is that everyone should listen for this one. I hope that by being signed to a bigger label that this band will be exposed to a wider audience because they really deserve it.
Overall Score: 9.5
Highlights: Every Track Is A Highlight
Posted by maskofgojira at 12:31 PM