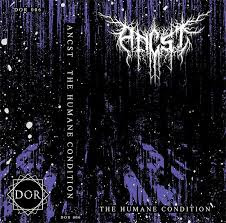 I had actually only heard of the band known as Ancst days before I was sent this EP from them. Garry, a friend of mine, had mentioned that his project was going to be doing a split with them and days later I received an email from the band asking me about this review. Granted, it's taken me a little while to get to it, but it was going to get done god damn it!
Sonically, when I looked the band up, I saw the terms "black metal" and "blackened noise" which made me think that this band was going to be more of a Sutekh Hexen kind of band. Very raw, very noisy, very intense, only because that is one of the bands I always relate the genre to. But when I actually listened through this two song EP I was surprised to get something pretty different from that. This band actually took some pretty different genres a fused them together into something I hadn't heard before, relatively speaking. Ascetic is an interesting blend of post-metal/post-black metal with more of a crust punk approach while Entropie is much more punchy, taking a simpler crust punk-meets-black metal approach. I actually really enjoyed both tracks, because both were not only different from what I expected but the styles being melded were brought together in a way that I found not only appealing but well done to boot. I wish there were more tracks on here to be honest, but hopefully the tracks for the aforementioned split are up to the height of these great songs here.
So yeah, not much more to say than this was a great little release that I highly recommend. It's got a lot of spunk and energy within these two tracks that I found to be really engaging and fun. So if you're a fan of black metal, hardcore, or even punk I wouldn't recommend passing this release up.
Overall Score: 8
Highlights: Entropie
Posted by maskofgojira at 8:28 AM