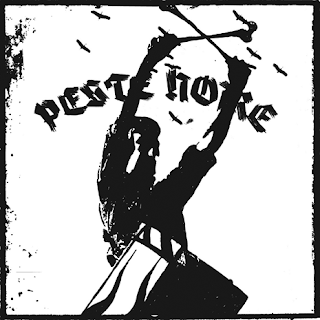 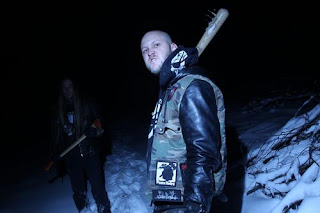 Peste Noire is one of those bands who I always question what they're going to do next. It appears like with each album they release they get weirder while sticking to a primal and raw aesthetic. I wasn't even aware that they had released a new album until I saw this one floating around on various blogs.

Despite maintaining a similar raw and noisy production tone through most of their their work, to call this band anything other that unpredictable would simply be false. Having heard just about everything in their previous four full-lengths, including flamenco guitar solos, electronic club beats, and polka segments, to expect anything other than the unexpected means coming in unprepared, or at least in my book it is. Despite the basement production style and the punk rock attitude, things have always turned out well in terms of how their albums come out. I'm constantly surprised by how well this band manages to fuse those two aesthetics on each of their albums. There are plenty of basement black metal and punk rock outfits who are perfectly fine with having guitar tones that are thin and weak sounding, drums that overpower a mix, and vocals that border between being obnoxious and down-right bad, yet this band, even form their first full-length was above that. Though I will say that at least on this album, the guitar tone has been stripped back to that thinner sound which can grate on the ears a bit.

To be truthful, even with the more eccentric tendencies this band has, I would still consider this to be the band's most punk recording to date. Both in terms of the production and just in execution the entire record carries the spirit of 70s punk music like Crass or Rudimentary Peni. In a certain light, I do admire that about this record because after making a record as ambitious as 2011's L'Ordure A L'etat Pur, this one really feels stripped back and more raw in comparison; but I do feel like this is not as strong a record as that one was. The songwriting on here just doesn't feel as full with wild abandon or as memorable as I would say either of the previous two full-lengths were to me. That doesn't mean there aren't highlights though, with a track like Niquez Vos Villes completely shattering any ideas of what sort of song it's supposed to be. Also, for as much as I would have preferred a thicker guitar tone, there were times where I felt like that thinner tone did work to the benefit of the song. Working underneath the acoustic guitar in Ode, it made for one of the best sections on the entire album in my opinion. But perhaps my favorite moment was on one of the album's shortest tracks, La Blonde, where about halfway through or so it transforms from a punk, almost post-punk, song into a dissonant black metal one. It's unexpected and a nice quick jab that really grabbed me every time I listened to that track.

So, overall, it's an album of hits and misses in my book, but I guess I'm more likely to forgive its misses because I do like what this band does and tries to do. It's not an album I expect a listener to be bored by because it is filled with plenty of different stylistic quirks to keep you interested. I suspect that there are plenty of people out there who won't have the same problems I did with the guitar tone on here, but I'd recommend this band's entire back catalog really.
Overall Score: 7.5
Highlights: Niquez Vos Villes, Ode, La Blonde
Posted by maskofgojira at 1:01 PM