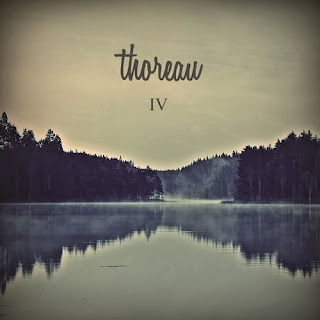 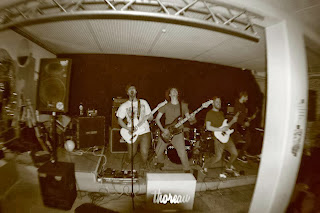 Speaking for myself, after having listened to probably a couple dozen bands that are labeled as "post-metal" since first starting this blog, it's become rather hard to find standouts. There is certainly no shortage of bands with talent but bands that are doing something interesting and unique are harder to find. I more or less knew the style that Thoreau were playing when I first skimmed through their album, though the details were not revealed until I actually listened through.

The four songs that make up this full-length contain, rather expectedly, what you'd more than likely hear on any other record labeled as "post-metal." Considering that the band don't exactly go out of their way to really put the listener off balance in the leading segments of the album, it can be rather hard to say that there's a whole lot here you won't have already heard before. Isis and Neurosis pioneered, then groups like Cult of Luna, The Ocean, Pelican (to name a few) brought it to new heights in terms of popularity as well as sonic experimentation. To hear a band who really don't take many risks, if any at all, with the genre can be not only disappointing but also dull. Now, this certainly isn't a dull album but it's an album that will give you exactly what you want if and when you decide to put it on; though to say there isn't a certain amount of pleasure in listening to a band just perform a style that you enjoy would be a lie. Yes, there's nothing too original on here, but it's performed well enough and the songs are able to maintain interest for their durations so it's not as torturous of an experience as my words above may have given the impression of. In fact, both of the songs that make up the center of the album, Flut and the title-track, are, in my opinion, pretty damn solid tracks. They're mostly instrumental, which is the case for most of the album album as well, and they have a nice melodic streak to them that I found myself warm towards as the songs progressed forward. I can only hope that the band do try some more things in the future. Take note though because I would never call this record bad, it's simply lackluster. For a band who are in a genre that is all about dynamics, I just wish there was a bit more on here that I didn't expect because you can more or less tell where things are going on a given track on first listen.

I wish there was really more to say on this matter, but that's more or less it for what I've heard on here. It's a pretty typical and/or standard post-metal record without much personality or without a whole lot of risks taken. If you're a fan of the genre and/or a completest of it this would be right up your alley, but frankly it didn't really do a whole lot for myself.
Overall Score: 6
Highlights: Flut, Helix
Posted by maskofgojira at 5:56 PM