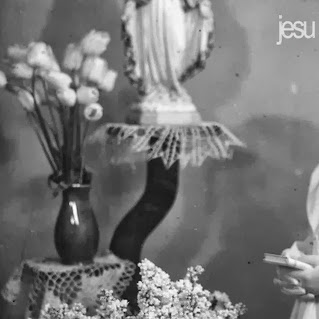 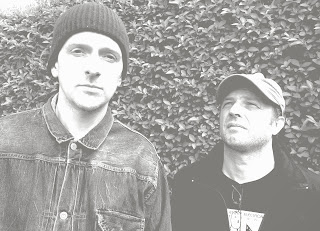 Justin Broadrick's long running project Jesu is a band of ups and downs in terms of quality (musically it's mainly the downs) so returning to the band for each new release can make someone a bit anxious. I haven't been the biggest fan of their last couple of releases, with their 2009 EP, Opiate Sun, being the last of their releases that I've really enjoyed as a whole. But I did have a good feeling coming into this one so hopefully it won't let me down.
With only five songs on here I was hoping that perhaps Broadrick's ratio for hits and misses would go up. Where an album like 2011's Ascension had a solid number of tracks but left me rather cold (I really only return to one or two tracks from it) and 2009's epic Infinity is feels less conducive to replay as other albums might because of it's single song format, I had imagined that a solid five track album might bring a stronger batch of material to the table. Sonically, if you've listened to any previous releases from Jesu you know more or less what you're getting yourself into. Over the course of it's almost decade long existence, the sound of this project really hasn't changed too much since establishing it's sound in it's first couple of recordings. You have the droning low-tuned guitars, mechanical drumming, extremely distorted bass, layers of ambiance, and Broadrick's monotone singing voice laden over the top - none of that has changed. I mean I wish I could say more on this subject but there really isn't much beyond that. A song like Comforter could, depending on how you view it, appear to draw a bit more from trip-hop or at the very least a more melancholic form of pop music, but you might not get that even if you really try to. That's just something I thought stuck out a little bit to me.
In discussing the songwriting though, I will say that it is a much better album on that front than the previous two full-lengths have been. Opener Homesick is a great piece of work and is easily the best track on the album. It's slow and plodding but not overextended and it has a solid hook that gets me every time I listen to it. Unfortunately the following four tracks, I think, don't live up to that opener, but at least none of them are bad or boring. There's a consistency that doesn't waver on here and for that, I think it's a better album than Ascension. The epic on here, the seventeen-and-a-half minute The Great Leveller, is a solid piece of work though. In terms of longform songs, I do think it's one of Broadrick's best pieces. I didn't ever feel bored by the piece and it had a nice progression throughout, from it's more shoegazy beginning to it's heavy verses, I think that it's just a well put together song. I can't say much else about the other tracks since, as I said above, they don't really deviate too far from the typical formula of the band, but if nothing else check out the two songs I recommend.
So, as a whole, it's a decent enough album. I don't think it's anything extraordinary and it still doesn't top my favorite release (Opiate Sun) but it's a nice return to form in my mind. So, not essential, but worth checking out if you're interested in all things Jesu or Broadrick.
Overall Score: 7
Highlights: Homesick, The Great Leveller
Posted by maskofgojira at 1:25 PM