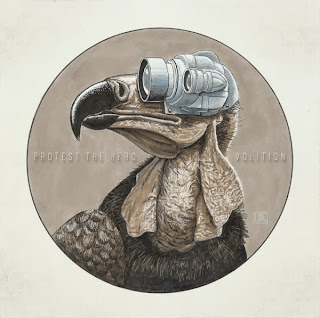 If I think back to when I first started listening to more technical based bands I think Protest The Hero would definitely be one of the first who I got into. Even though it wasn't all that long ago, the first time I heard Bloodmeat on Headbanger's Ball I was hooked. Their unique brand of progressive based metalcore instantly grabbed me because despite that label, there were surprisingly few -core esque moments to their sound.
If I'm being honest, despite how much I do admire the talent the members in this band have, I really haven't enjoy the entirety of any of their previous full-lengths. There are songs that I like and go back to but not an entire album; and to a point, I would say that streak continues with this album, though I will say that I think this is by far their most consistent release to date. In terms of just a songwriting approach, while the band retain that same level of extremely technical instrumental prowess and vocal acrobatics, the songs are much more memorable and well written. A problem I have had with some of their previous work is that on a given album, the songs would bounce between being catchy, compact prog-metal songs and what seemed like a string of technical playing and wanking off without anything to really sink in. I understand that plenty of people will disagree with that assessment but remember this is just one man's opinion. On this album, while there are still a couple of tracks that fall onto that latter category, the majority of these songs definitely have at least one spot that stuck with me.
While I can't say his influence on this record reached into the songwriting department, the addition of Lamb of God's Chris Adler behind the drumkit on here does appear to have had a rejuvenating effect on the way these songs are paced. While I can't say much for former drummer Moe Carlson aside that he was obviously a good drummer, his performances never really grabbed me the way Adler's playing has on here. Now, I'm not really a fan of Lamb of God, but even I know the guy is a beast behind the kit and he really does bring this energy and life to these songs. Playing music as technical as this can sometimes feel like an exercise if you don't have something to push it forward and that's exactly what Adler does. He kickstarts each of these songs into high-gear and propels them forward in a way I've never experienced this band before. There's just so much vibrancy in here and while I think it would be unfair to give him all the credit, I certainly do give him props for making this band sound more exciting and urgent than they ever have before.
With all that being said, I also feel as though this is the first album where the band have truly embraced dynamics. Yes, previous albums have definitely had their more mid-tempo sections, but this album actually makes use of some down time, even if it's minimal and ultimately not a huge part of a given song, it does at least help in terms of keeping things from getting stale. The short acoustic end to Plato's Tripartite or Mist for instance is somewhat insignificant in the grand scheme of the album, but does at least serve as a temporary breath catcher between songs. I could have used a bigger embrace of those influence inside the songs but this is the point where this band is at - a short acoustic section can actually impact the flow of one song to the next. I also felt that in terms of just song structuring, there was a bit more in the way of flow between thrashingly fast and mid-tempo on here. The end of a track like A Life Embossed definitely pops out after the onslaught that came before it. I would also like to point out the performance of Rody Walker on here who's vocals have always been over the top but on here sounds like he's really embracing his inner Mike Patton-isms (of which I'm certainly keen towards).
While it's not a complete home run, as I said above, I do think this is easily the band's most consistent and memorable record to date. With strong songwriting and performances, this definitely is the best album the band have put out to date and I couldn't be more pleased with it. Fans of progressive metal would do well to believe the hype and check this album out.
Overall Score: 8.5
Highlights: Yellow Teeth, Plato's Tripartite, Skies
Posted by maskofgojira at 9:19 AM