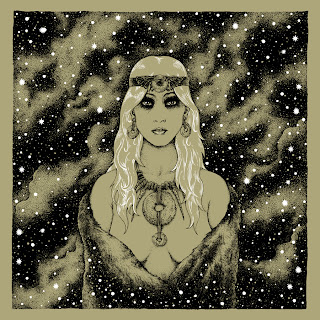 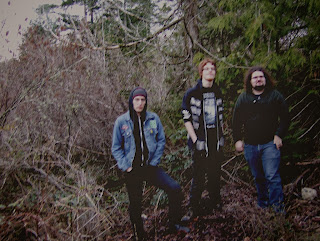 Being put into the whole "cascadian black metal" movement can be the sort of thing that has either brought bands great success or failure. While there are some who claim that this movement has provided black metal with some of it's most interesting groups since the 90s, other would say that it's a movement based off the success of a couple of good bands. So I found it somewhat interesting that bands are still being put into that movement since, as far as I knew, it had ended a while back.

There's what you could almost call an imbalance on this record in terms of how the record is laid out, with the opener being eighteen minutes long the the remaining three tracks totaling up to just over twenty. Not a problem, but it is interesting how the band decided to present themselves on here. It's a bold step opening an album with a lengthy piece like the title-track, and while bands from this particular movement have never really been ones to embrace the standard song formats, this is up there in terms of a bold opening statement. As far as what you can expect from this track, because of the movement with which I've seen this album associated with, and with good reason, you will be able to hear influences from other bands from that "scene" in this track (as well as the following three as well). I guess the main problem I have with that is just that it sounds more or less like what I've already heard from those bands, and obviously I don't have a problem with rehashing ideas if it's done well or interestingly enough, but it's just that it's introduction so much reminded me of the likes of Echtra and Skagos that it was almost off-putting. That's more or less the basis of the first half of this track. It moves from ambiance into an acoustic piece. The last half of the track is where I thought that the band really gained their own footing - when they went electric. I'm not going to pretend that once the band goes metal they suddenly become a revelation but to say that the track really picks up speed and momentum after that transition would be an understatement. Yes it's raw and gritty, but there's a real interesting use of atmospherics used throughout that was one of several things that kept me interested and engaged.

As the following three songs progress forward it becomes apparent that while I did come into this record slightly skeptical because of what these guys are attached to, they do have a sound that is a deviation from the standards. While there are hints of it used in the title-track, the blues influence in the band's playing really came out in the shorter tracks. While there's plenty of straightforward tremolo riffing and whatnot used throughout the album, it was those bluesy moments that I think really made this stand out to me. The idea of combining blues with black metal is one that, as I've said various times before, is one that seems to be getting more popular as time goes forward but the bands that pull it off well will continue to have favor (at least with me) because of how they do it. While the use of the banjo on the intro of closer If The Sky Falls, We Shall Catch Larks certainly does bring to mind the most recent work of Austin Lunn's project Panopticon, I wouldn't go so far as to call it a rip-off or a parody of that.

I think it's pretty obvious at this point that I do favor this record to many others that have been attached to this "scene" in recent years and hope that people check it out because of how well it's done. There's real talent on here in many places and though it certainly isn't perfect by any means it's for a debut full-length it's pretty damn good. Definitely give this one a shot if you're a fan of more forward thinking - but ultimately still very raw, black metal.
Overall Score: 8
Highlights: Fragments of A Fallen Star, Keening
Posted by maskofgojira at 9:08 AM