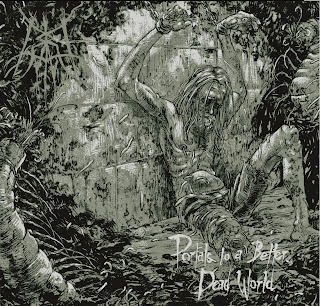 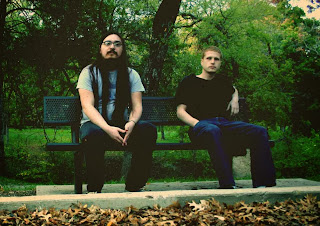 Since first hearing the project that is Cara Neir I've become increasingly obsessed about the material they have chosen to release. It appears as though they simply go from strength to strength (which is quite frustrating considering how many bands there are out there attempting to do one sound well) and each new release is like Christmas for me. I've had quite a while to sit with and digest this album since I first got the promo for it and so I feel as though I can now speak about it with something more of a clear mind.

After a stellar grindcore oriented release last year in the form of the Sublimation Therapy EP, it was somewhat refreshing to hear this album's more straightforward (in a sense) black metal approach. Yes, to call this a black metal record might be giving the wrong impression because there are still the intricacies and the influences from other genres coming through very clearly throughout this record, but this does feel much more in that vein than I've heard in previous releases. The record is a lot more honed in terms of style in that regard because it doesn't shift genres too often as a the previous full-lengths have, but the genres are joined together in a more mature and stable way. Some influences that have been more prevalent in the past have been reduced in favor of others while more minor ideas seem to have risen to the surface. The post-rock sound for example was something I had heard in almost every project I've listened to and on here there really isn't much of it at all, which, once I sat down and thought about, was actually quite an interesting and subversive thing to do. While that influence may not be the first thing a lot of listeners may think about (I probably think about it too much), if you consider everything, or at least a majority, of the releases Garry has done, him reducing that influence on this record is actually a really smart thing to do and I can only imagine how it changed his writing on here.

As always with Cara Neir, Garry is an absolute master when it comes to writing riffs (as well as songs). These seven songs contain more catchy riffs than I've heard in most records this year put together. Songs like Closing Doors or Red Moon Foreboding are some of the catchiest black metal songs I've heard in a long ass time. It's just incredible how this man manages to write and perform most of these songs, and produce the album, and it turns out so ahead of pretty much every other band who released an album this year. Along with that, despite the focus being narrowed down on this album, or at least I think it's been narrowed down, there's still a solid amount of variety shining through in each of these tracks. The screamo and crust punk influences definitely shine out in particular amongst all the black metal riffing on here. You get more melodic and up-tempo guitar lines that definitely don't come from any black metal that I've heard and the contrast between those super up-beat and melodic lines with the more traditional tremolo guitar ones creates some of the most interesting guitar lines I think the band has put out.

Closer 3,380 Pounds definitely needs to be singled out on here though because it really stands out on this record, not only for bringing out the most post-rock ideas to the table on here, but because of everything else the band accomplish in it. Everything from it's downtrodden intro to the post-rock climax and it's droning close works. It's some of the fastest ten minutes to pass by this year. Then there's the clean vocals and strings that are used in the final minutes that really show another side to the band that I certainly haven't heard - though I would love to hear that expanded upon in the future. In addition to that, the Melancholia sample used fits in perfectly. I'm not usually one to talk about a movie sample on a record, mainly because they don't do anything, but not only did I happen to actually know the movie in question but it fit the mood at the time it was being used. It's easily one of the best songs I've heard all year and if that doesn't make you want to listen to at least this track, let alone the entire album, I don't know what will.

Yes, you should go out and listen to and buy this album because it's amazing and among the best of the year. I have to file one complaint on it and say that I wish it was longer, but knowing more or less what the band have in store for releases in the near future I can't complain too much about that. If you haven't listened to, or bought, your copy of this record yet I don't know what to tell you other than you're missing out.
Overall Score: 9
Highlights: Closing Doors, Exalting The Shadow Proprietor, 3,380 Pounds
Posted by maskofgojira at 8:56 PM