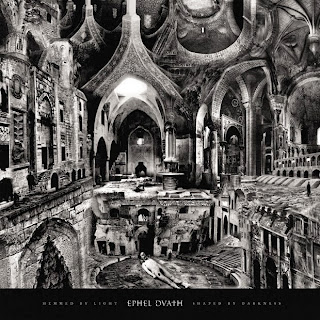 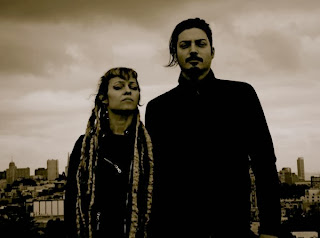 I first became acquainted with the band that is (or was) Ephel Duath back around the time of the release of Through My Dog's Eyes, which was all the back in 2009 at this point. Even back then when I was first starting to get a grasp on the weirder and more eccentric side of metal they were still a bit out there for me. Eventually I grew to love their brand of metallic jazz rock that was unlike anything anyone else was doing before or is doing now and I'm glad to hear another full-length after all this time.

Continuing onward with the heavier (if only slightly) sound that was first showcased on last year's On Death and Cosmos EP, it was apparent from the opening notes of Feathers Under My Skin that this was going to be the band's most aggressive sounding (once again, if only slightly) record to date. I keep saying only slightly because even back on Phormula, the band still wasn't super heavy or brutal sounding, despite the rougher production and more of a black metal influence coming through, and on the most recent two full-lengths it seemed, at least to me, as though they were leaving more of that metallic guitar tone behind in favor of more of gritty, but ultimately cleaner, tone. On here however, there's a definite low-end weight that gives it that more metallic edge. Yet, at least in terms of the guitar work, this album is still just as jazzy and off-kilter as you may have either expected or you have heard. Honestly, no one writes riffs or progressions like Davide Tiso, or at least no one I know of, and it's always amazed me how he always manages to create another album. After listening to each release from this band I always wonder how he manages to write riffs as strange sounding without repeating himself.

Particularly, the guitar riffing style on a couple of tracks on here, Through Flames I Shield for example, do give off a bit more of a technical death metal vibe - although I may just be looking too deep into this. Aside from his vocal contribution and production work I don't know how much input Erik Rutan had on the songwriting, but there are definitely a couple of spots on here where it did make me question if perhaps he had some input on a riff or two. There are obviously tracks that are pure Tiso, where it's nearly impossible to come across sounding like anyone else, but those couple of spots did seem almost like gateways to me, perhaps fans of more that technical style could hear certain guitar lines and find a way in - but like I said, maybe I'm just reading too much into it. But to touch on Rutan's production work on here, because he's mostly known for doing death metal albums, it's actually quite nice to hear how well he was able to make this sound. I'm sure he did influence how heavy that low-end comes through on here, but he definitely struck a nice balance between being weighty with the low-end and still clean enough for a lot of the subtleties not to be lost in the majority of the guitar work. The overall sound is also really well done, he always makes albums that are clean sounding, but this one never comes across as sounding overproduced, which some of his records have. It's a great production job and I would actually rank this as one of his best.

For myself, the band is slightly less quirky on here and on the previous EP, if only due to the addition of Karyn Crisis behind the mic. I haven't been a huge fan of her work in the past, with her contributions to albums by Aborym or Solefald, and while I admit that her work in this band is the one I am the most taken with, her voice just isn't as eccentric as Luciano George Lorusso was. That might not be a problem for some people, and honestly it's not something that's a huge stumbling block for me, but as a matter of just personal taste, I currently feel like his style was more suited to the band's style. Crisis' maintains a style on here that is more focused in terms of range and style, so it is a more consistent performance in that regard. I know she can sing, but the vast majority of her performance on here is between the range of a death growl and an aggressive sort of moaning/singing. It's an interesting technique and approach to take, I just I would have just liked to have heard more exploration on her part.

I've always liked this band so it probably isn't a surprise to hear that I like this record as well. I think it's a bit more accessible because of the guitar work, production job, and Crisis' vocals than perhaps previous efforts have been, but it's still not easy listening by a long shot. So if you think you've got the patience for something like this, I'd definitely give it a shot, but if any of this sounded a bit too out-there for you just know that it doesn't get any easier.
Overall Score: 8.5
Highlights: Tracing The Path of Blood, Within This Soil, Shaped By Darkness
Posted by maskofgojira at 8:41 AM