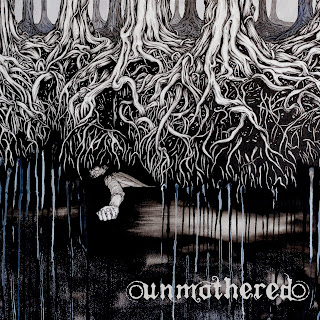 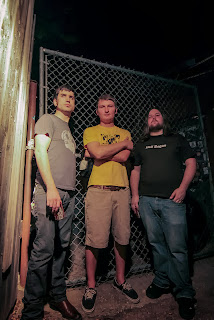 There's something to be said for simply doing something heavy and leaving it at that. Simplicity is sometimes the best route to go in regards to certain genres, but apparently that isn't the route that Unmothered was interested in. When I saw the genre that people kept tagging this with (the one that I put above) I was surprised enough to that I had to check if I had the right album.

Everywhere I looked at this album had them listed as a sludge/doom metal band which I thought was weird cause when I first put it on, I thought they were closer to a death metal band - shows what I know about anything. Just for those wondering, I didn't play the wrong record. I did go back to the album though and I did identify what other people were singling out as the slower influences though, so I did get it in the end. While these guys don't necessarily bring the super slow riffs I'd immediately single out as a doom metal influence they do bring the heavy like most of those bands do. The guitar tone and production give it that heft that I think does do the band justice. I guess it was the sludge influence that I may have mistake for death metal but whatever, there is a surge of good writing on here. Because the guitar is so heavy sounding, in some instances I would give that band credit just for that, but the writing on here is pretty spot on as well, with a damn solid riff in almost every track. It's a good balance of that low-end heavy with melody and strong root in good riffing. There's also a well utilized use of reverb throughout the recording as well. It never dominates the songs but actually (in perhaps one of the few instances of it being used recently) actually enhances the power of these songs. It allows the riffs to sound so much more massive.

I expected this to be a decent record coming into it, but it genuinely surprised me and I'm glad I actually took the time to listen to this instead of blowing it off. Maybe the stupidity of me thinking this was closer to death metal may mean that these guys can cross over a bit easier into that sort of a fan base. But if you're just a fan of heavy guitars and strong sounding riffs, than definitely give this one a listen.
Overall Score: 7.5
Highlights: Solstice, Leviathan
Posted by maskofgojira at 11:49 AM